This week, we celebrate the birth of Martin Luther King, Jr., who dedicated his life to the cause of racial equality and social justice. Dr. King’s work led to the passage of the Civil Rights Act of 1964, which outlawed discrimination based on race, color, religion, gender, or national origin. Yet still, more than 50 years after King’s tragic assassination, race impacts personal injury cases. The process of calculating damages in wrongful death and personal injury cases use both ethnicity and gender to justify lower payouts.
Only now is that starting to change.

Race Impacts Personal Injury Cases, and So Does Gender

In wrongful death and personal injury lawsuits, plaintiffs seek damages, or financial compensation from the responsible parties, who caused harm due to negligence or intention. These damages can include non-economic factors like pain and suffering. Economic damages include medical bills, funeral expenses, and lost wages. They can also include future lost wages, or the potential income a victim could have made, if it were not for the injury.
Forensic economists calculate these amounts and provide recommendations to insurance companies and in court testimony.
The National Association of Forensic Economics (NAFE) issued a survey in 2009. They discovered that almost 44% percent of respondents used both race and gender data when estimating lost wages, and more than 48% used gender data only.
Because women and people of color currently earn less in our society, the wage tables used by these forensic economists result in lower compensation than for white males.
In 2016, the Washington Post used these race/ethnicity- and gender-specific wage tables, to determine that a 20-year-old African American woman would receive about $1.24 million in future lost wages. A 20-year old white male with an identical education, and an identical claim involving an identical injury, would receive almost twice that amount—$2.28 million.
The same article described a case of a pre-school age son of two college graduates (one with a master’s degree). The boy suffered mental disabilities due to exposure to lead paint in the family’s apartment. Lawyers for the boy asked for $3.4 million. The defense estimated damages at $1.5 million; their rationale was that the boy was unlikely to attain higher education because he was Hispanic. The calculations provided by forensic economists factored the boy’s ethnicity, and the jury awarded the boy only $2 million.
In another case, a car accident caused the death of both an unborn male baby and a six-year-old girl. The fetus received 84% more than the girl.

Critics argue that race and gender-based actuarial tables reinforce systemic discrimination. They say the data is inherently inaccurate for the purpose of making future projections. Because they are based only on historical facts, such tables fail to account for potential future progress in eliminating gender and racial disparities in our society.
Those who defend the practice counter that the disparities in estimated future earnings are not a cause of the problem, just a reflection of reality.
Whether or not that is true, the use of race and gender-based tables certainly perpetuates a vicious cycle. 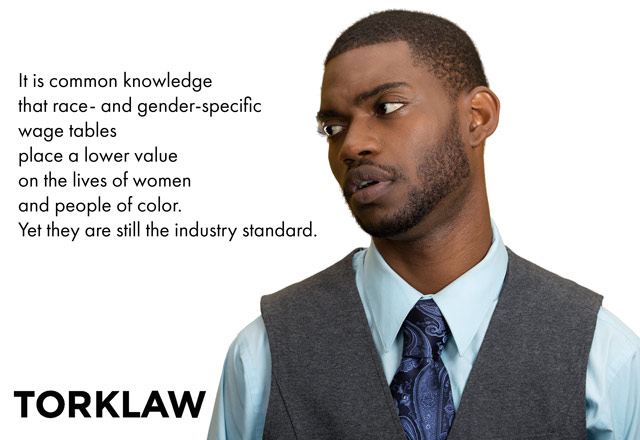 Take the case of lead poisoning from residential paint. While there are many causes, the fact remains that a disproportionate number of young children of color live in low-income housing. These residences tend to have higher levels of lead-based paint, even though it’s been illegal since 1971. This can lead to various serious health problems: anemia, brain development issues, kidney failure, and seizures.
But when race/ethnicity is used to pay lower settlements and court awards, property owners have little incentive to invest in removing the toxic paint. Paying the damages is cheaper than renovation, repair and painting.
The same thing occurs with cases involving toxic waste, unsafe drinking water, and chemical output – it’s cheaper to pay low damages than deal with the cause of the problem.
Lower payouts to women and people of color also impair their access to legal representation. Because most personal injury lawyers take cases on a contingency fee basis, they may be less likely to take cases that have a low potential payout.

There is some hope.
In 2018, the Lawyers’ Committee for Civil Rights’ report urged lawmakers to ban the use of race and gender-based wage tables. In 2019, that same group, along with the ACLU and the NAACP, and thirteen other prominent U.S. civil rights organizations published a letter to NAFE. They called upon the forensic economist group to stop using the “egregiously flawed premise that the lives of people of color and women are worth less than those of white men.”
Several courts have rejected damages calculated based on race/ ethnicity- or gender-based statistics. A federal judge in the Eastern District of New York recently ruled that race-based wage tables are unconstitutional.
In November 2019, California Governor Gavin Newsom signed S.B. 41 into law. Starting on January 1, 2020, reducing damages for lost future earnings due to based on race, gender or ethnicity is prohibited in personal injury and wrongful death in California. This law is the first of its kind in the United States.
There has been one federal legislative effort that has attempted to address this problem nationwide. U.S. Senators Cory Booker (D-NJ) and Kirsten Gillibrand (D-NY) introduced the Fair Calculations in Civil Damages Act of 2016 in the Senate. It was introduced in the House by U.S. Representatives Joseph Kennedy III (D-MA) and Mia Love (R-UT).
The bill would have prohibited calculations for projected future earnings based on the race, ethnicity, gender, religion, or actual or perceived sexual orientation of the plaintiff. Sadly, that bill never left the Senate Judiciary Committee or the House Subcommittee on the Constitution and Civil Justice.
Our hope is that more states follow California’s example and pass laws to limit how race impacts personal injury cases.