January 15, 2021 marks the 92nd birthday of Reverend Dr. Martin Luther King, Jr. The United States commemorates this day with a national holiday to celebrate his life on the third Monday in January.

At TorkLaw, we have always been committed to the ideal that all people deserve equal treatment under the law. Our goal as personal injury attorneys is to ensure the courtroom doors are open to everyone, not just those with money and power. So, we are inspired by the legacy of Martin Luther King, Jr., not only as a civil rights leader, but for his lifelong struggle for social and economic justice, and the empowerment of working-class people of all colors.

In 1983, President Ronald Reagan signed a bill creating a U.S. federal holiday in honor of Dr. King. Observed on the third Monday every January, Martin Luther King Day was first celebrated in 1986.

It was not until 2000 that all states recognized the holiday. Notably, Arizona had initially recognized it as a paid federal holiday, but Governor Evan Mecham rescinded that decision in 1987. Because state voters failed to pass a law in 1990 to make Martin Luther King Jr. day an Arizona holiday, the National Football League decided to move the 1993 Super Bowl game from Phoenix to the Rose Bowl in Pasadena, California. Arizona passed the law in 1993 (and won the Super Bowl back in 1996).

New Hampshire made MLK Jr. Day a holiday in 1999. In 2000 Virginia, Utah and South Carolina recognized the holiday, making it official in all states. Some states combine the day with other holidays, which are typically devoted to civil rights. However, three states – Alabama, Arkansas, and Mississippi – celebrate Martin Luther King, Jr.’s legacy on the same holiday as Robert E. Lee Day. If this seems odd, it’s because Lee was a Confederate Army commander in the Civil War who once said, “the relation of master and slave…is the best that can exist between the white and black races.”

“It may be true that the law cannot make a man love me, but it can keep him from lynching me, and I think that’s pretty important.” – Martin Luther King, Jr., October 15, 1962″

Increasingly, Martin Luther King Day is seen as a “Day of Service,” when people are urged to give their time to helping those less fortunate than themselves.

Dr. King’s father and maternal grandfather were both pastors in the Baptist church. His father, Martin Luther King Sr., imbued in his children a commitment to racial equality; he viewed racism and class superiority as an affront to God’s will. While his son eventually followed in his footsteps, becoming a minister at Ebenezer Baptist Church in Atlanta, Georgia, Martin Jr. initially studied medicine and law at Morehouse College.

After that, he attended his first integrated school, Crozer Theological Seminary in Pennsylvania, where he graduated with a Bachelor of Divinity degree, went on to earn a doctorate in systematic theology from Boston University, where he met the woman who would become Coretta Scott King.In 1955, after Rosa Parks was arrested for violating Montgomery, Alabama’s racist city code requiring her to give up her bus seat to a white passenger, Dr. King, with other civil rights leaders, organized the citywide Montgomery bus boycott and legal action against the city, forcing Montgomery to end segregation in public transportation. 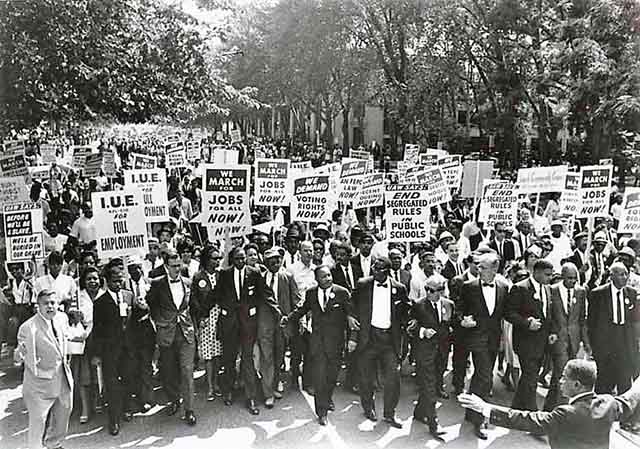 Along with other civil rights activists, Dr. King founded the Southern Christian Leadership Conference (SCLC), which launched a series of campaigns in Southern cities to end segregation everywhere.

Dr. King was inspired by the work of Henry David Thoreau, having read his Essay on Civil Disobedience during his time at Morehouse College. In his autobiography, King said that he reread the work several times, and “I became convinced that non‑cooperation with evil is as much a moral obligation as is cooperation with good.”
He was also inspired by the way Mahatma Gandhi led India to independence through non-violent activism. In 1959, Martin Luther King visited Gandhi’s birthplace in India, which profoundly increased his dedication to both civil rights and the principles of nonviolence.

As Dr. King led SCLC’s protests, he advocated nonviolence, encouraging protesters to march peacefully and avoid responding with aggression or hostility. Footage of non-violent African-American protesters shown on national news being blasted with high-pressure fire hoses and attacked by police dogs in Birmingham, Alabama, led to public outrage. National sentiment in favor of the protesters was a key factor in the eventual desegregation of that city. 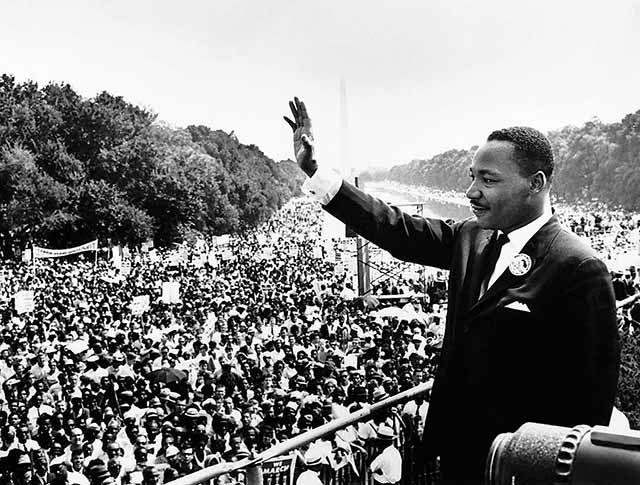 The SCLC then called for nationwide desegregation, and led the March on Washington, held in Washington, D.C. on Wednesday, August 28, 1963. The pinnacle of this event Dr. King’s famous “I Have a Dream” speech.

‘I have a dream that my four children will one day live in a nation where they will not be judged by the color of their skin but by the content of their character.’ — Dr. Martin Luther King, Jr., August 28, 1963

Public support for the Civil Rights Act of 1964 resulted in then-President Lyndon Johnson signing the legislation, which prohibited employers from discriminating based on race, color, sex, religion, or national origin. In the same year, Dr. King was awarded the Nobel Peace Prize for Civil Rights and Social Justice. Dr. King then led efforts to register black voters, leading the march from Selma to Montgomery, which helped bring about the Voting Rights Act of 1965. 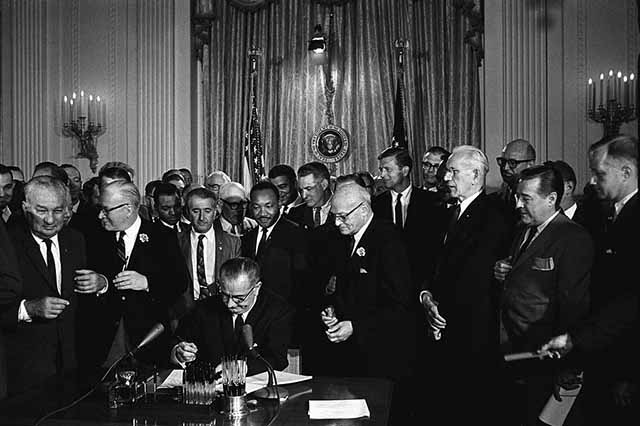 After the Voting Rights Act passed, Dr. King devoted himself to his what he saw as the second phase of of the American civil rights movement, leading a “multiracial army of the poor,” to save America from what he saw as interrelated evils: racism, poverty and war. Dr. King felt that economic justice was indistinguishable from social justice, and he, better than most, understood the power of working people, working together. The Poor People’s Campaign was based on the idea that all Americans deserved an economic bill of rights, which included a stable, respectable job earning decent wages; affordable housing, especially for the poor and disenfranchised; and the ability to play a significant role in the government.

He began speaking out against United States involvement in the Vietnam War, urging lawmakers to instead spend the money on the needs of its citizens. While most Americans eventually agreed with his position, his views at the time were controversial, and he fell into disfavor with President Johnson. 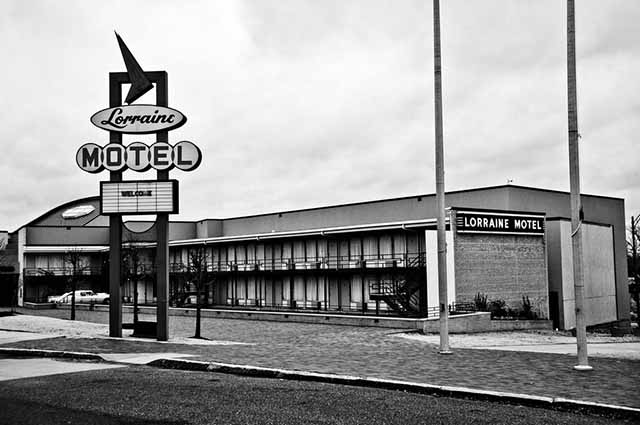 On April 4, 1968, Dr. King, was in Memphis, Tennessee to support 1300 sanitation workers striking for safer working conditions, fair wages and racial equality. Before he could achieve the goals of the Poor People’s Campaign, he was shot and killed by James Earl Ray as he stood on the balcony of the Lorraine Motel. The work continues.

On November 21, 1991, Pres. George H.W. Bush signed the Civil Rights Act of 1991, which made (capped) compensatory and punitive damages available under Title VII of the 1964 Civil Rights Act and the Americans with Disabilities Act.

What this means is that, according to the U.S. Equal Employment Opportunity Commission, “Whenever discrimination is found, the goal of the law is to put the victim of discrimination in the same position (or nearly the same) that he or she would have been if the discrimination had never occurred.” This is true for any aspect of tort law, and employment discrimination is a tort, or a wrongful act, under the law. Victims of discrimination are allowed to sue employers for compensatory damages, both monetary and emotional, and may also receive punitive damages, to punish the employer for particularly malicious or reckless acts of discrimination. Employers will also be required to stop the practice, and prevent it from happening in the future.

While we do have laws in place to protect people from discrimination, it would be naïve to believe that racial discrimination and other forms of systematic prejudice don’t exist. We also have a long way to go on the journey toward economic justice. Part of Martin Luther King, Jr.’s significance is the example of leadership he provided to work toward that goal. At TorkLaw, we are grateful for Dr. King’s example as we strive to complete his journey, on Martin Luther King Jr. Day, and every day.