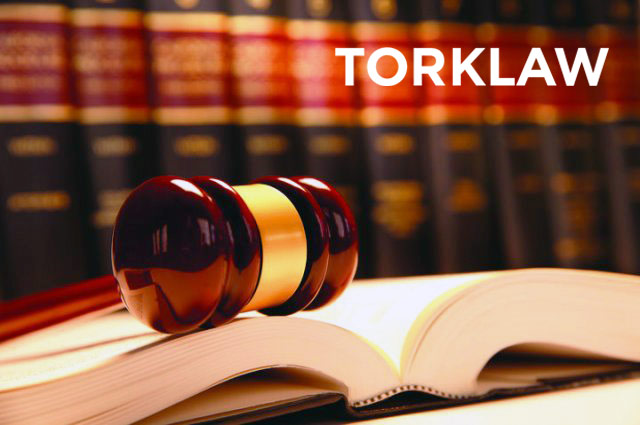 This legal glossary is a no-nonsense guide to some of the  unfamiliar and confusing legal language you’ll hear during a personal injury case.

Accident: An unforeseeable, unexpected event that occurs without intent and causes bodily injury or damage to property.

Ad litem or Guardian Ad Litem: The person appointed by the court to protect the interests of a minor in a personal injury or divorce case.

Adjudicate: To hear and settle a case, conflict or dispute through the court system.

Affidavit: A written statement of fact that is confirmed by an oath in court, or by a notary public or another official.

Arbitration: An alternative form of dispute resolution that allows parties to avoid a court case, and bring a legal dispute before an arbiter, or neutral third party. The arbiter acts as a judge in hearing evidence and making a decision. This is different from mediation, in which a third party works with the parties in dispute to facilitate an agreeable result.

Assumption of Risk: In an injury case, a defendant’s claim that the injured person should have known the danger of being injured in the situation in question.

Award: The final decision in a case, by an arbitrator or commissioner.

Breach: A failure to perform a duty.

Burden of Proof (Plaintiff): The level of proof a plaintiff must establish that the defendant’s actions more likely than not caused the plaintiff’s injuries (see preponderance of the evidence).

Causation: The relationship between an action and an outcome (see proximate cause).

Claim: A request to an insurance company for payment on a policy; or, in a legal proceeding, the making of a demand for enforcement of a right provided by law, such as compensation.

Claimant: A person requesting payment from an insurance company or in a legal matter.

Class Action Case: A lawsuit that is brought on by a group of people that have been harmed in the same manner by one singular entity.

Compensation: In a personal injury case, the money paid to the claimant(s) after they win an injury case.

Compensable injury: In a worker’s compensation claim, an injury arising from employment, and in the course of the employee’s work, to which the employee is entitled to receive compensation.

Compensatory damages: The amount of money one can recover in payment for injury or economic loss.

Complaint: An official document the plaintiff files with the court to initiate a lawsuit; the complaint lists the plaintiff’s grievances, demands and the legal basis of the claim.

Contingency fee: An agreement between an injured party and their lawyer that the lawyer will not collect payment until or unless the
case is won; this allows the plaintiff to hire a lawyer without paying a retainer fee.

Counterclaim: A complaint filed by a defendant to seek damages from the plaintiff who is suing him or her. 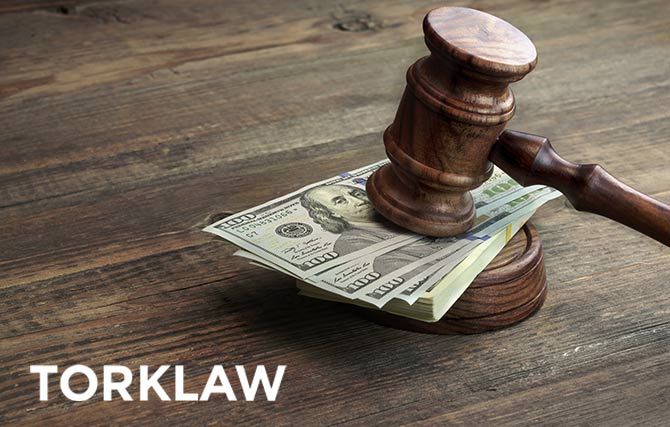 Deductible: The amount of money the insured person must pay toward their claim, as specified by their insurance policy.

Defendant: The person who is being sued in a civil case, who is allegedly liable for the plaintiff’s injuries.

Deposition: A pre-trial, oral process for a witness to provide sworn testimony in a legal case.

Distracted driving: Driving while paying attention to something else, such as texting, eating, applying makeup, looking up directions, adjusting the stereo, etc.

DUI, or Driving Under the Influence: Driving with a blood alcohol content (BAC) of .08 or while impaired by the use of drugs (including marijuana) or alcohol.

Duty of care: The assumption that everyone has a duty to not cause harm to others; if an average person, under the same conditions, would see that an act (or failure to act) could injure another person, they can be liable for that action (or failure to act).

Evidence: Any type of information presented at a trial to prove or disprove a legal claim, including material items, documents,
expert testimony and witness statements.

HIPPA: The Health Insurance Portability and Accountability Act of 1996 is the U.S. federal law established national standards for the privacy and security of personal health information.

Indemnity: An obligation to provide compensation (usually money) for a loss, injury, or damage.

Judgment: The decision in a court case.

Liability: Legal responsibility for one’s actions or omission; or the burden of fault by a party found to be responsible for injury or damage to another person.

Litigation: A lawsuit or any action that uses the court system to resolve a legal matter.

Loss: The monetary value placed on injuries or damages suffered by an individual in an accident caused by someone else’s negligence. Losses may be economic (medical costs, property damage) or non-economic (pain and suffering) and include things like past and future income loss, future medical care, etc.

Loss of consortium: A form of non-economic damages to compensate a surviving spouse/domestic partner for the loss of affection, companionship, emotional support, love, sexual relations, and assistance with duties such as child care and household tasks which the person has lost due to the negligence of the defendant.

Malfeasance: Intentional wrongdoing or doing something that should not have been done. (Not to be confused with misfeasance, which is doing something improperly or carelessly; or nonfeasance, the failure to perform a lawful duty.)

Malpractice: Conduct that doesn’t meet professional standards and results in provable damage to a client or patient. 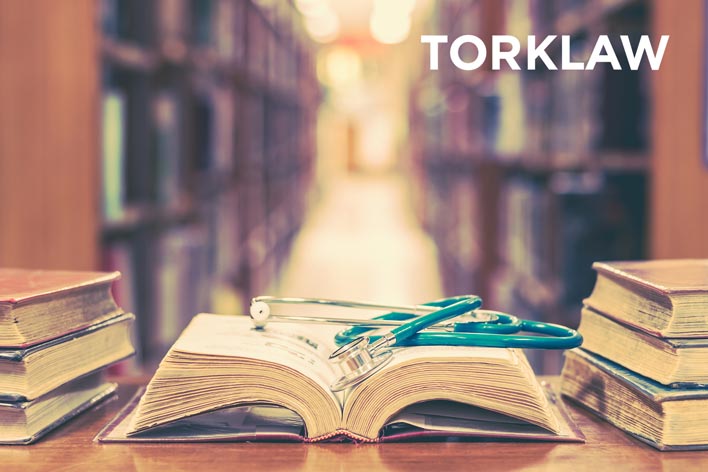 Mediation: A voluntary, confidential and informal process in which a neutral third party assists in settling a legal dispute to facilitate an agreeable result without going to trial. This is different from arbitration, in which the two parties bring a legal dispute before an arbiter, who does not participate in the discussion, but acts as a judge in hearing evidence and making a decision.

Misfeasance: Doing a lawful thing improperly or carelessly with an unfortunate result. (Not to be confused with malfeasance, which is intentional wrongdoing; or nonfeasance, the failure to perform a lawful duty.)

Negligence: Failure to use the care a reasonable person would use, or which the law requires to protect others. To prove negligence in a personal injury case, a plaintiff must show: 1) The defendant had a duty of care to the plaintiff; 2) the defendant breached, or violated that duty; 3) the defendant’s breach of duty was the proximate cause of the plaintiff’s injury, and 4) the plaintiff suffered compensatory damages.

Negotiation: A discussion or process to reach an agreement or resolve a dispute.

Nonfeasance: Failing to perform a duty or act you are legally responsible to do. (Not to be confused with malfeasance, which is intentional wrongdoing; or misfeasance, doing something improperly or carelessly.)

Out-of-Pocket Expenses: Any money spent from the plaintiff’s own funds that are related to the injuries caused by the other party. These may include costs for transportation, household help, medical expenses not covered by health insurance, such as co-pays, deductibles or certain treatments, etc.

Personal Injury law: Personal injury law involves situations in which a person is injured or killed by the negligence or wrongdoing of another, such as a car accident, a defective product, a dangerous workplace, medical malpractice, etc.

Plaintiff: The person filing the personal injury claim, seeking to recover compensation for injuries (allegedly) caused by the defendant.

Preponderance of the Evidence: The level of evidence to show that the defendant’s actions more likely than not caused the plaintiff’s injuries.

Product Liability: The duty of product manufacturers, or anyone in the product’s distribution chain, including designers, component part manufacturers, installers, distributors, wholesalers, and retailers, to ensure the products they place on the market are safe for consumers.

Proximate Cause: An event, action, or failure to act, without which an injury would not have occurred. 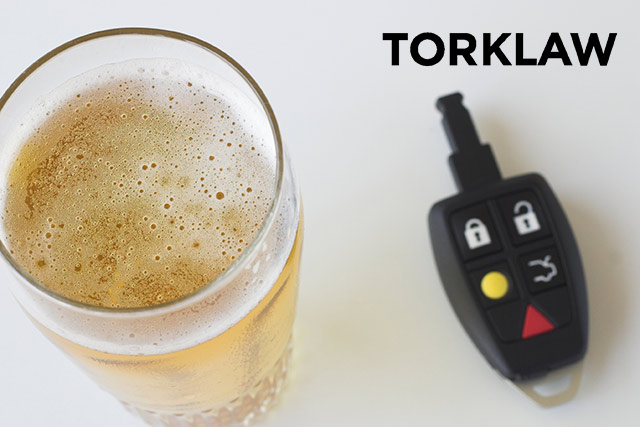 Punitive Damages: Damages awarded in a lawsuit to punish the defendant for gross negligence, maliciousness or fraudulent acts, and
to serve as an example to discourage others from similar conduct.

Quality of Life: A term describing the type of life the injured person had prior to the injury, as opposed to after his/her injuries, including activities of daily living, social life, sports or recreation, overall mobility, outlook, and future hopes.

Quid pro quo: A Latin term meaning, “something for something,” used to identify what each party expects from the other.

Reasonable Care: The level of care that would be considered adequate by a fair and sensible person, under the same circumstances (see reasonable person).

Reasonable Person: A hypothetical individual who exercises the qualities our society needs people to have to protect each other; a test of reasonable care is based on whether a reasonable person would act, or fail to act, in the way the defendant did.

Rehabilitation: The medical process of restoring an injured person as close as possible to the state he/she was in prior to the injury.

Standard of Care: A level of care a reasonable person would have used in a similar situation (see reasonable care).

Statute of Limitations: The amount of time between the date of injury and when the injured person can still file a legal claim for damages.

Strict Liability: A legal term that imposes expanded responsibility for wrongdoing, regardless of who was at fault, and places a greater burden of proof on the defendant, who must prove they are not liable. Strict liability is often applied to cases involving defective products.

Subpoena: A court document presented to an individual that legally binds them to appear in court and/or give testimony or evidence in a legal proceeding.

Third-party claim: A legal action against a third party who may be to blame for the injury; in a workers compensation case, for example, a third-party claim may be filed against a product manufacturer if the employee was harmed by a defective product.

Tort: A wrongful act, either intentionally or unintentionally, that causes injury or loss to another person, whether or not it is a crime. A “tortfeasor” may be sued in civil port and forced to compensate the victim if he/she loses the case.

Workers Compensation: Insurance purchased by employers to cover the costs of employee injuries sustained at work.

Wrongful Death: A death caused by the actions of another person, whether intentional or unintentional (i.e., through negligence).