The True Costs of an Accident Are Significant. Don't Be Left Short Changed. Learn What You Are Entitled To. 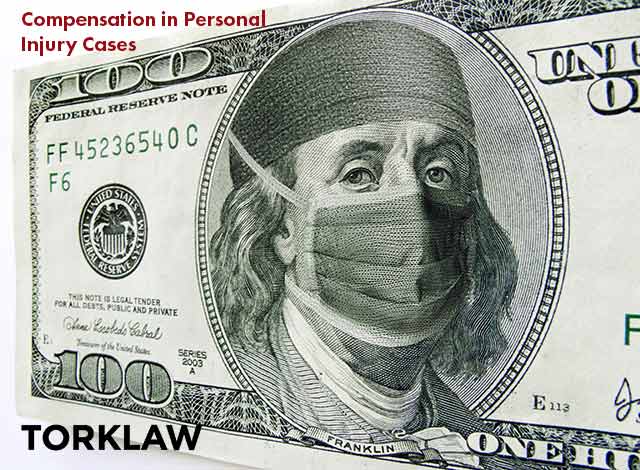 If you have been injured in an accident caused by another person, you are entitled to receive monetary compensation. How much you receive depends on several factors. The objective of a personal injury lawyer, is for you to get the most money for your personal injury case.

Economic damages, also known as pecuniary damages, relate to out-of-pocket costs, on which one can place a precise monetary figure. The two main types of economic damages in an accident case are medical expenses and lost wages.

Medical expenses can include: the cost of paramedics and ambulance transportation to the hospital, emergency room treatment, hospital fees, costs of medical devices, and costs of rehabilitation and physical therapy. They can even include anticipated future medical costs, for the length of time your doctors estimate it will take you to recover from the accident.

Lost wages represent the time you are off work because of your injury. Lost wages can include bonuses, overtime, job retraining and loss of earning capacity. You may even receive damages for wages you expected to earn in the future.

Often, damages for future earnings are granted in a lump sum, which is discounted to a smaller amount that will eventually equal the claim amount, if invested wisely. For instance, if you were projected to have lost $1 million in future earnings, you might be awarded $600,000, which the court has calculated to be worth $1 million over your lifetime, if invested properly. This is done to diminish the financial burden on the defendant, without diminishing the award given to the accident victim.

Aside from medical expenses and lost wages, economic damages could include property damage. For instance, if your car was damaged or destroyed in a car accident, you are entitled to compensation for car repair or replacement. You are also entitled to the value of any other objects that were damaged in your car at the time of the accident.

If your car was damaged, you may receive compensation for repairing the vehicle to the condition it was in before the accident. However, you may only receive compensation equivalent to the fair market value of your car. If the car has been totaled, but its fair market value is less than what you owe on it, you must pay the difference to the finance company out of pocket.

Non-economic damages are not as easily calculated, but are just as legitimate. They cover such factors as pain and suffering, inconvenience, physical impairment, disfigurement, and emotional distress and mental anguish. Non-economic damages also include such things as comfort, society, affection, intimacy, ability to engage in sexual relations, play with your children, and other intangible quality of life issues that we don’t often think about until we are injured. Non-economic damages can be significant, and often constitute the bulk of the damages awarded in an accident case.

There are a few types of cases in which the plaintiff is barred from receiving non-economic damages. For instance, if you were found to be driving under the influence of alcohol or drugs, you are not allowed to receive non-economic damages, even if the accident was entirely the other party’s fault.

Similarly, if you were in an accident and the other party was at fault, but you were unable to establish proof of insurance, then you are ineligible to receive any non-economic damages in compensation. This is why it is important to be insured to the minimum coverage limits required by your state.

There is one important exception to this rule: If you were driving your own car but did not have insurance, you may still recover damages for non-economic losses if the person who caused the accident was convicted of driving while under the influence of alcohol or drugs.

How to calculate compensation for pain and suffering

Calculating pain and suffering can include both physical pain as well as mental and emotional suffering. Physical pain relates to bodily injuries, from sprains and bruises to third-degree burns, amputations, or chronic injuries. Physical pain, even if it does not have a clear economic price, is still relatively easy to prove in court, and to convince a jury to take seriously.

Factors that affect the amount of damages for mental and emotional suffering can include fear at the time of the injury, apprehension over its effects, and symptoms associated with post-traumatic stress disorder (PTSD) including headaches, nausea, insomnia, chronic anxiety, and the development of phobias associated with the accident. In cases where an accident has caused physical disfigurement, mental and emotional suffering can also include such factors as embarrassment, ridicule, and humiliation.

Unfortunately, because they are not as readily apparent as physical injuries, damages for mental and emotional suffering can be more difficult to obtain than damages for physical pain; juries may be skeptical of their existence. Fortunately, with recent advances in science and psychology, these types of damages are becoming easier to demonstrate.

Is there a time limit to file a personal injury claim?

The time within which you must file a personal injury claim after an accident is contingent on something known as the statute of limitations.

It is best to file the claim as soon as possible after the accident, because evidence tends to deteriorate over time, whether it is physical evidence or eyewitness memory. Also, if you file too close to the deadline, and your case has an error and must be re-filed, you may risk losing your chance to sue.

How to file a personal injury lawsuit

If you are considering filing a personal injury lawsuit, the first thing you should do is speak to a lawyer. The legal system is incredibly complex, and no untrained individual, no matter how intelligent, can handle a lawsuit on their own without extensive preparation.

If you are concerned about attorney fees, keep in mind that many personal injury lawyers charge on a contingency fee basis, which means that the client pays nothing unless they win the case or receive a settlement, at which point they pay the attorney a percentage of the money they received in compensation.

After an accident occurs, it’s a good idea to prepare for the possibility of a lawsuit. Take notes on what happened while your memory is fresh. Take photos of the accident, if you can. Talk to any witnesses while they are still at the scene, and collect their contact information so that you can talk to them later. Carefully document expenses, so you can easily calculate your damages later. Be careful about what you say about the accident, either in person or on social media, because a careless turn of phrase can be used as evidence against you.

Keep in mind that, if you are trying to seek compensation for a car accident, a lawsuit might not be your first step. Your first step is to file an injury claim with the appropriate insurance company. Then, you must negotiate with the insurance company’s adjusters. This is often difficult, because insurance adjusters are skilled at obtaining a favorable settlement for the insurance company, which is another reason why it pays to have an attorney in your corner. If a settlement cannot be reached, the case may go to arbitration, which is like a court case but involves a third-party arbitrator. If this option also fails, the case will become a lawsuit, and be decided in court.

We answer many of the most common accident compensation questions here.

If you still have questions or would like to speak directly with an accident lawyer, we provide free, no obligation case consultations. Our attorneys will happily answer any questions you have about your case. Call us toll free at 888.845.9696.