People sometimes ask me why I practice personal injury law. The answer is simple: it is really the only area of the law that allows you to change the average person’s life in truly “David vs. Goliath” situations: average people, innocent victims, up against insurmountable forces.

Personal injury law is a form of civil law sometimes referred to as “tort” law, for the French word for “wrong.” Over the history of tort law, these cases have been used to shape laws and regulations that have changed all our lives for the better; keeping our communities safe and holding manufacturers accountable for dangerous products.
Melvin Belli, an attorney known as “The King of Torts,” had a wonderful response to those who accused him as being an “ambulance chaser.” He would say, “I get there before the ambulance.”
When people are injured in an accident through no fault of their own, they need more than medical care, because they often are forced to deal with serious financial and psychological repercussions when they are at their weakest. Civil tort legislation enables individuals to recover financial reparation for their incurred injuries and to hold wrongdoers accountable for their actions — or inaction.

If you are facing a behemoth, multi-trillion-dollar insurance company bound to deny you the money you need to recover, you may not be able to afford an attorney, let alone an army of lawyers like the other side will have. Personal injuries like me, and those at my law firm, TorkLaw, can provide you with high-quality representation, and you won’t pay a dime unless we win your case.
Reason #1 why I practice personal injury law: At TorkLaw, my team and I truly represent “the people.”

The Continuing Battle Against Tort Reform

In 2010, my colleague, Allen Wilkinson and I wrote an editorial, entitled “The Case Against Tort Reform,” which was published in the Los Angeles Daily Journal and the San Francisco Daily Journal. Since then, unfortunately, the case remains ongoing.
Most tort reform laws enacted by states are intended to protect healthcare providers; some are designed to safeguard manufacturers of pharmaceuticals, asbestos or other products. But make no mistake: tort reform laws are NOT meant to protect consumers, or innocent victims of accident injuries.
An example Allen and I used in our editorial illustrates how the caps on damages, the most insidious aspect of tort reform, in reality, punishes those most in need of—and deserving of—full compensation. A toddler who received treatment at an HMO after a hiking accident suffered severe brain damage and blindness due to incompetent care. The jury awarded the child $7.1 million in a malpractice suit, which was sorely needed by the family to pay for the constant and continuing care he would need for the rest of his life. But, no thanks to damages caps as part of the Medical Insurance Compensation Reform Act of 1975 (MICRA), the judge lowered it to $250,000.00, the maximum amount allowed. This amount barely covered the child’s care for a few years – after that, the family was on their own. 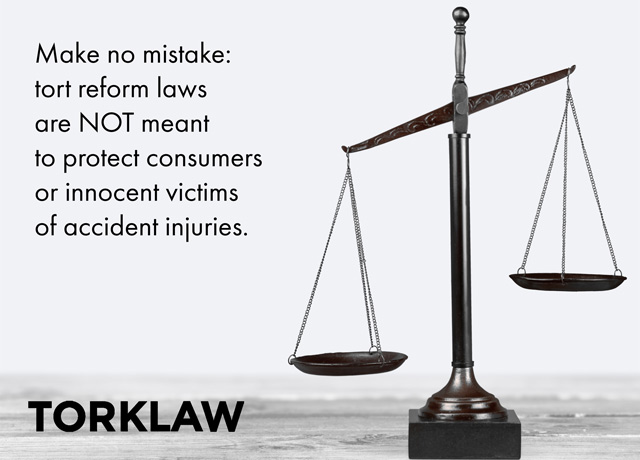 This, also, is why I practice tort law: to support the fight against laws and public policy that harms families like these.

So-called “Frivolous” Lawsuits that Were Anything But

There are a couple of cases that are frequently cited examples of the need for tort reform. But anyone who bothers to discover the facts will find that the opposite is true. These cases are actually about people who were injured through clear negligence, and 100% deserving of even more compensation than they received.
The first so-called “frivolous lawsuit” is the infamous case of Stella Liebeck, the 79-year old woman who sued McDonald’s because her coffee was too hot. Here’s the real story: Ms. Liebeck suffered (emphasis on the word suffered) third-degree burns over her thighs, groin, genitalia and buttocks. (If you’ve got a strong stomach, do a Google Image search “Stella Liebeck injuries” to see how “frivolous” they were.) She was hospitalized for a whole week and needed skin grafts.
The suit found the McDonald’s operations manual required their coffee to be served at near-boiling temperatures, much higher than the industry norm, had already settled several lawsuits for the same violation. They had been ordered by the courts to stop doing it, but has refused to comply.
Liebeck only received $600,000, not millions, as the rumors state. Initially, she only asked for $20,000 to pay her medical bills. McDonald’s offered her $800. A jury awarded her the $2.7 million, which she never received. It took a torturous appeals process for her to receive less than a quarter of what she deserved.
Then there was the story Ronald Reagan told in a speech, about “the guy who sued the phone company because a drunk driver hit his phone booth,” referring to victim Charles Bigbee as a “loony.” What The Gipper didn’t mention is that the phone company had already received multiple complaints of people getting stuck inside that same booth by a faulty door. Also, because it was on a dangerous corner, a booth in the exact same location had been demolished by another car two years prior. Many people witnessed the poor man struggling to get out of the booth as he watched the drunk driver barreling toward him at full speed.
He lost his leg in the accident, and lost his job as a result, and Pacific Telephone & Telegraph Company only paid him $12,500. That’s what’s loony.
Changing this public perception of personal injury law is yet another reason why I practice it. 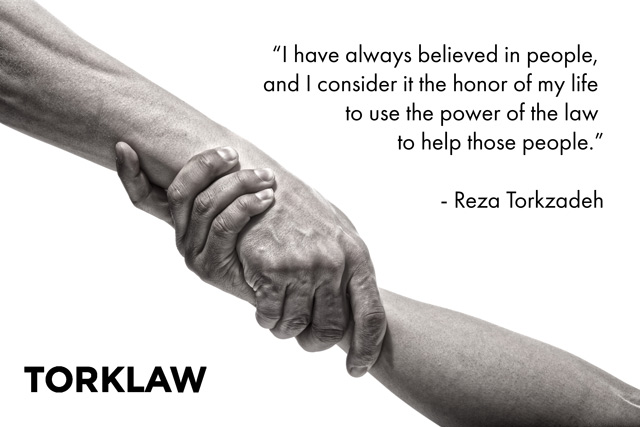 Many people see assault, abuse and rape as issues for criminal courts. We’ve seen many cases in which the criminal justice system fails to prosecute egregious criminals, or assigns them ridiculously light sentences. When this happens, victims can seek justice by filing a personal injury claim in civil court, to hit the perpetrator where it hurts: in the wallet.
The benefit of doing this is that in civil court, the plaintiff’s burden of proof is lower; they only need to persuade the judge or jury that the claim is more likely to be true than not.
And it’s worked: in a 2002, four women were raped during exams by a South Dakota doctor, who was charged but acquitted of all. The women sued him in civil court, and the doctor was forced to pay them a total of $1.8 million in damages. There are many cases like this, in which people who abuse others and get away with it in criminal court are made to pay in civil court.
Achieving justice is also why I practice tort law.

The Important Impact of Tort Law

I honestly shudder when I think about a world without tort law:

As a personal injury attorney, my clients are everyday people who have been hurt or wronged in some way by no fault of their own. They are Davids, fighting their own Goliaths, like car manufacturers, and pharmaceutical companies, and local and state governments.
I’ve had cases that have caused cities to redesign dangerous intersections. I’ve had cases that made medical device manufacturers produce better, safer products. I have had cases that have held insurance companies accountable when their insured is at fault. These results have not only changed corporate behavior and encouraged companies to put people over profit, but have also changed our communities – and lives – for the better.
So when I’m asked why I practice personal injury law, I say this: I have always believed in people, and I consider it the honor of my life to use the power of the law to help those people.