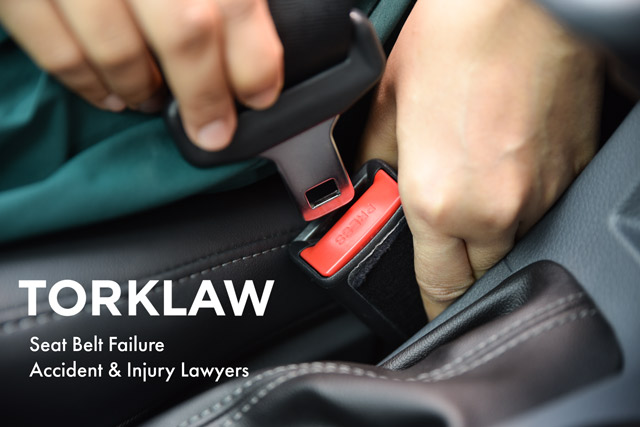 Since 1968, all new vehicles sold in the United States are required to be equipped with seat belts in all designated seating positions. This requirement is meant to protect occupants from injury in the event of an accident. Since 1995, all states (excluding New Hampshire), have laws requiring vehicle occupants to wear seat belts and all states have child restraint laws.

Seat belts are are designed to limit the motion of vehicle occupants and reduce injuries during a crash. While statistics repeatedly and consistently show that wearing seat belts helps save lives, a faulty seat belt can have devastating consequences in the event of a crash, typically resulting in major injuries or fatalities.

Seat belt failure cases are complex and challenging to investigate. Victims should seek the services of an experienced car accident lawyer who is adept at handling auto product defect issues. At TorkLaw, our seat belt failure lawyers work with renowned experts in the field who will help investigate and compile the evidence needed to ensure you receive adequate compensation.

Why Do Seat Belts Fail?

In 2016, the National Highway Traffic Safety Administration (NHTSA) estimated that seat belt use in passenger vehicles saved about 14,668 lives. While the national seat belt use rate is at 90.1 percent, these seat restraint systems don’t always function as intended. They have the potential to fail during a car accident, resulting in catastrophic injury, or death.

Here are some of the most common reasons seat belts fail:

This occurs when the force of a collision causes the release mechanism to disengage, and the seat belt unlatches. This is a much-disputed topic: automakers state that inertial unlatching does not occur in a real-world auto accident. Private labs and experts believe this scenario is possible during a collision.

This happens when the occupant thinks the latch plate is fully inserted into the buckle, but is not actually engaged, and any amount of force can cause the belt to release.

Sometimes seat belt release mechanisms are triggered during a crash by some part of the occupant’s body, specifically the elbow or arm.

Webbing is the material out of which the belt is made. Manufacturing defects can cause webbing failure, or it can also be caused by belt rubbing against a sharp edge in the vehicle.

Failure of the anchor points that hold a seat restraint system are rare, but may occur due to material or manufacturing defects, or improper assembly. In 1995, Chrysler recalled vehicles where the anchors were not placed in the right direction, which left them vulnerable to stresses during a crash.

Retractors are the mechanisms that hold seat belts snug against vehicle occupants. When these mechanisms fail, there is slack in the seat belt and occupants may not be restrained properly in the event of a car accident.

Forensic Investigation After a Crash

A question that is often asked in civil litigation cases involving traffic accidents, especially those in which an occupant has been ejected from the vehicle, is whether the occupant was wearing the seat belt at the time of the collision.

An accident reconstruction expert can analyze the evidence to determine whether the injuries occurred because the occupant was not buckled up, or because the seat belt failed.This demands a multi-faceted approach, including analysis of occupant kinematics (the features or properties of motion in an object), injury correlation, and seat belt use to determine whether there are manufacturing or design defects, including flaws in the seat restraint system.

It is important to preserve the vehicle in its damaged state, unaltered, after a car accident, so that important pieces of evidence, which may make or break your case, are not lost.

When a seat belt doesn’t work as intended, there is the potential for devastating injuries. Here are some of the most common injuries caused by seat belt failure:

When a person is thrown forward in the vehicle, or ejected because of a seat belt failure, he or she may strike their head and suffer a brain injury. These injuries need surgery, hospitalization and extensive rehabilitation, and may result in lifelong disabilities.

Injuries to the spinal cord are particularly common when occupants are thrown back in the vehicle or partially ejected. Severe spinal injuries may also result in lifelong disabilities such as paralysis.

Blunt-force trauma caused by seat belt failure may damage internal organs such as lungs and kidneys leading to internal bleeding. 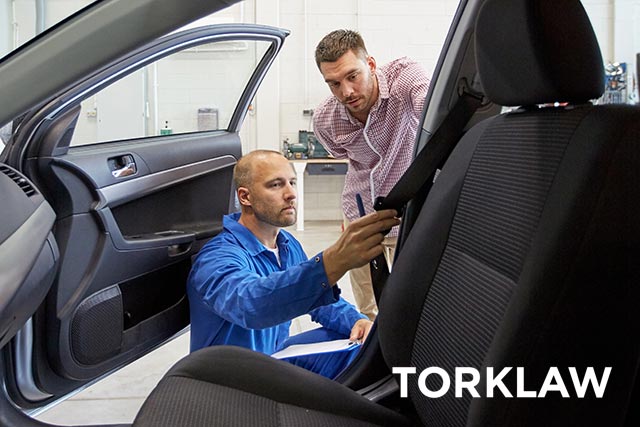 If you or a loved one has been injured in a crash due to seat belt failure, you may be able to file an auto defect lawsuit against the automaker and/or the manufacturer of the seat belt. There may be other parties named in the lawsuit as well. The value or worth of your case will depend on the nature and extent of the injuries you have suffered and the degree of negligence on the part of the defendant(s). Some of the damages that may be claimed in a seat belt failure case include medical expenses, loss of income or earning capacity, past and future pain and suffering, wrongful death, or punitive damages, if it is found that the defendant’s conduct was particularly egregious or outrageous. An experienced seat belt failure lawyer will be able to provide you with more information in such cases.

In a seat belt failure case, much like any other product defect or personal injury case, the plaintiff has the burden of proof. This means that you must present evidence to show that the automaker and/or the seat belt manufacturer were negligent. Here are the elements of an auto product liability case:

Auto defect cases, particularly seat belt failure cases, can be extremely complex and challenging to prove. The experienced seat belt failure attorneys at TorkLaw have successfully represented injured victims against automakers and auto part manufacturers. Please call us today to discuss your case at absolutely no cost to you. We are here to help you secure maximum compensation for all your injuries, damages and losses.