Pedestrian-detection systems fail in the most dangerous situations

In a new Wall Street Journal article, AAA announced test results showing that vehicle pedestrian-detecting technology fails at night, when pedestrian accidents are deadliest.
When asked to comment on the article, Honda and General Motors deflected responsibility. Their stance is that human drivers are still required to pay attention and control their vehicles. They have a point.
However, AAA’s director of automotive engineering voiced concerns about how this recent technology is marketed. Many car makers aggressively advertise their new safety features, potentially giving consumers a false sense of how effective they really are in protecting pedestrians.

Pedestrian Fatalities Are at a Crisis Point

Auto makers have been striving to implement technologies and driver assistant systems that improve safety for vehicle occupants. And they have been relatively successful. National Highway Transportation Safety Administration data on traffic fatalities shows that vehicle occupant deaths have dropped 7% between 2008 and 2017.

In that same period, fatalities involving pedestrians have increased 35% .

75% of these fatal pedestrian crashes happened at night.
In the article, the AAA director classifies this as a crisis. 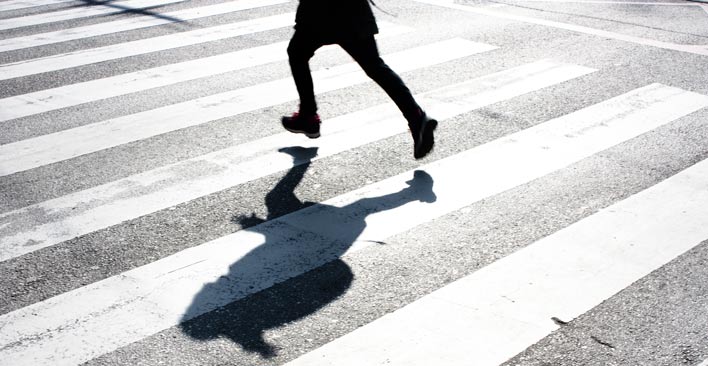 Many crash avoidance technologies use cameras, radar, and other sensors to identify obstacles in the vehicle’s path. These automated features will first alert the driver, and then apply the brakes if the driver doesn’t respond in time.
A new study by the Automobile Association of America (AAA) tested four different cars to see how well their technology worked at detecting pedestrians. The models tested were Chevy Malibu, Honda Accord, Tesla Model 3 and Toyota Camry.
One test simulated an adult crossing the street while the car was turning right. In another, a child pedestrian dummy ran into the road from between cars parked at the curb.
In the first case, all the cars struck the adult pedestrian dummy. In the second simulation, 89 percent of the cars struck the child. When tested after dark, the systems failed completely. Test drivers drove directly toward the pedestrian dummies, but the cars not only did not stop, they failed to alert the driver at all.
In short, there are situations in which pedestrian-detecting technology in vehicles is completely useless, and those situations are among the most deadly for pedestrians.
[bctt tweet=”AAA research suggests that drivers who are overly reliant on pedestrian detection systems may find themselves at fault for a tragic pedestrian fatality.” username=”torklaw”]

In a previous post, we pointed out the need for more data to show how safe autonomous cars really are. It turns out, we were right to be concerned.
In the age of artificial intelligence, it is imperative for drivers of vehicles with pedestrian-detection technology to be aware of the system’s limitations.

TorkLaw attorneys have tried innumerable cases of motor vehicle accident injuries. Trust us: if you have an automated driving system, the automaker will not defend you if you injure or kill someone in a traffic crash. Whether it is a pedestrian, bicyclist, motorcyclist, or someone in another vehicle, you will be liable for potentially hundreds of thousands of dollars in damages.
If you have a vehicle with automated driving features, please understand that you are still legally accountable for driving it. Keep your eyes on the road, your hands on the steering wheel, and your attention completely focused on the task of driving. Lives depend on it.