When you experience trauma to your head or body in an accident, the most common soft tissue injuries are lacerations, contusions, abrasions, and avulsions.

Lacerations and contusions are the medical and legal terms for cuts and bruises. But don’t write them off as minimal nuisance injuries. Lacerations inflicted by a dangerous animal are extremely painful and disfiguring and cause sever include bleeding, pain, infection, musculoskeletal damage, and scarring. Contusions to the brain resulting from a blow to the head can result in a traumatic brain injury (TBI); contusions in other areas can also be serious.

A contusion is a type of hematoma, also called a bruise. A contusion is classified as a “closed wound,” caused when tiny blood vessels (“capillaries”) are damaged or broken as the result of blunt trauma that does not break the skin. The injured blood vessels leak blood into tissues under the skin.

Contusions to the head can be potentially deadly, even if the impact didn’t seem severe and the observable injuries do not appear to be serious. The contusions may cause a subdural or epidural hematoma, which is heavy bleeding into or around the brain.

Severe impacts can cause serious contusions in muscles, bones, or even internal organs. In severe cases, swelling and internal bleeding may cause shock. If tissue damage is extensive, you may also have a fractured bone, dislocated joint, sprain, torn muscle, or other injury. Severe injuries that cause difficulty in moving a limb, abdominal bruising, bruising behind the ear, and the feeling of liquid under the skin may indicate a life-threatening injury and requires immediate medical care.

In some cases, built-up pressure from fluids several hours after a contusion injury can disrupt blood flow to muscles. This is known as “compartment syndrome,” and often requires urgent surgery to drain the excess fluids. This can occur in the hand, forearm, upper arm, abdomen, buttocks, and entire lower extremity (the legs). In compartment syndrome, the patient complains of deep, constant, localized pain that seems out of proportion with the injury. Compartment syndrome is a serious medical condition requiring emergency care. Untreated, it can result in tissue necrosis, permanent functional impairment, and, if severe, kidney failure and death.
Sometimes a bruise does not go away and instead becomes firm and larger in size. It may also continue to be painful. If a large collection of blood forms under the skin or in the muscle, it may need to be drained by your doctor. 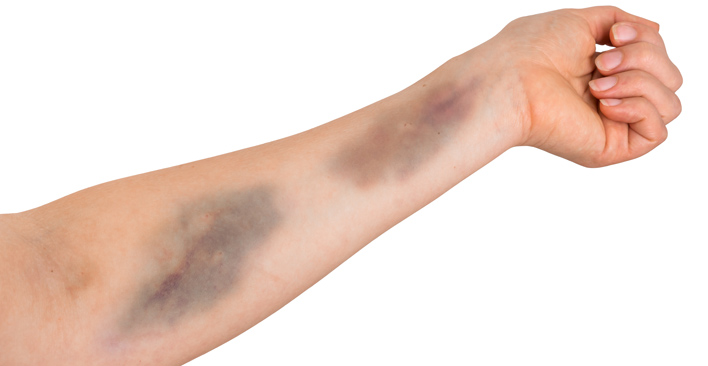 Known as an “open wound,” a laceration is a jagged and irregular cut or tearing of soft body tissue. Lacerations may be caused by some blunt trauma against a sharp object, such as being cut by broken glass in an automobile accident or a fall. The seriousness of a laceration depends on its location, depth, whether a foreign body or substance enters the wound, the amount of blood loss, and whether the cut becomes infected.

A puncture wound is a type of laceration caused by a sharp or pointed object such as a nail, animal teeth (such as a dog bite), or a tack. This type of wound usually does not bleed excessively and can appear to close up. Puncture wounds are prone to infection and should be treated appropriately.

Two other types of open wounds are common in personal injury cases: abrasions and avulsions.

A tetanus shot may be required when a person has suffered any injury that breaks the skin. If a dog, cat, or other animal inflicted the damage, you must verify that the animal was current on its rabies vaccination; otherwise you must undergo a painful series of anti-rabies shots.

For mild lacerations with no complications, medical treatment generally is not necessary. Apply direct pressure to control bleeding. Wash the cut with soap and tap water and keep it clean and dry with a bandage or gauze pad. Putting alcohol, hydrogen peroxide, and iodine is not recommended, as this can delay healing.

Medical attention for a laceration, abrasion or avulsion may be required when:

The goals of laceration treatment are to stop the bleeding, avoid infection, restore function to the involved tissues, and achieve optimal cosmetic results with minimal scarring. When a person goes to a doctor or emergency room for treatment, the laceration should be evaluated to assess its severity and involvement of muscle, tendons, nerves, blood vessels, and bone. The would may require stitches, or in the case of an avulsion, a skin graft may be needed.

Infection is the biggest medical concern in the first few weeks following a laceration or other open injury. Signs of infection include severe pain, draining pus, redness beyond the wound edges, fevers and chills, or excessive wound swelling. If you think you have an infection, seek prompt medical care.

Scarring is also a major concern. Although appropriate wound care will minimize the risk and appearance of a scar, many factors are beyond your control. For instance, jagged cuts with more traumatic skin damage (such as a cut surrounded by an area of abrasion) tend to scar more.

Referral to a surgeon is appropriate in cases of deep wounds to the hand or foot; full-thickness lacerations of the eyelid, lip, or ears; lacerations involving nerves, arteries, bones, or joints; penetrating wounds of unknown depth; severe crush injuries; severely contaminated wounds requiring drainage; and wounds for which the victim or the doctor is strongly concerned about the cosmetic outcome.

You can help to minimize the possibility of scarring by watching for signs of infection (such as redness, swelling, oozing pus) and seeing your doctor promptly. You should also avoid sun exposure, as newly healed tissue burns more easily and is often left discolored. A scar will often look red and swollen after removal of the sutures, but may fade over the next year. 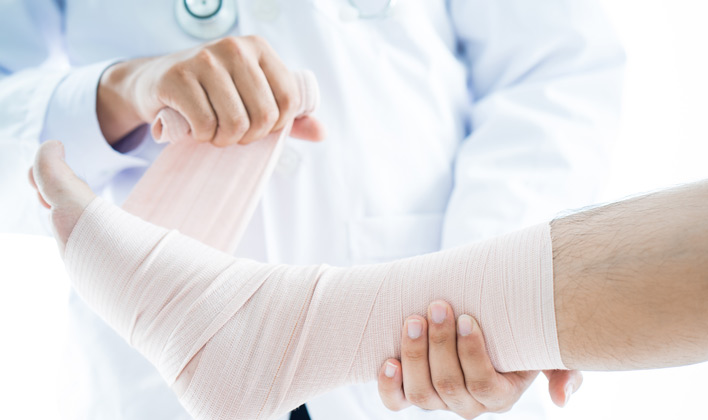 Soft tissue includes muscles, tendons, ligaments, and nerves. Soft-tissue injuries are micro-tears to the muscles and ligaments that are more painful and often take longer to heal than broken bones.

Sprains and strains occur when a person forces his or her muscles to perform beyond what the person does on a routine basis. Muscle tissue may become strained when forced to exceed its ability to work. Besides muscle tissue, sprains, strains and tears can also affect ligament or tendons.

A ligament attaches bone to bone; when it is overextended or torn, it is known as a sprain.

A tendon attaches muscle to bone; when it is overextended or torn, it is known as a strain.

When a ligament or tendon is torn, it is a serious injury that may require surgery.

Frequent types of sprains, strains, and tears include (click on each to learn more):

If you receive any of the above soft tissue injuries from an accident caused by another person, you should seek medical attention. At the very least, you should take photographs of your injuries and document any complications. If these complications start to impact your health, your job, or your lifestyle, you may be entitled to compensation. Call now and talk to a lawyer for free about your case: 888.845.9696.