Whiplash Associated Disorder occurs when the symptoms are more chronic and widespread than the injury itself appears. This may be caused by difficult-to-diagnose impacts to the intervertebral joints, discs, ligaments, cervical muscles, and nerve roots.

Each year, some two million Americans suffer from whiplash, most of them having been injured in a car accident when their car was stopped and rear-ended by another vehicle operated by an inattentive driver.

Whiplash can also be caused by amusement park rides such as roller coasters, sports injuries, being punched or shaken, or falls from bicycles or other sources. Whiplash is also found in shaken baby syndrome.

Whiplash is not a medical term. It is a type of soft tissue injury, that doctors may refer to as neck sprain or neck strain; or even more technically, cervical sprain or cervical strain. Whiplash often involves pain and stiffness in the neck, but may also affect the surrounding muscles in your head, mid-back, chest, shoulders, and arms.

Whiplash can take days, weeks, even months to develop. You may feel fine after an accident, but the typical symptoms of whiplash—such as neck pain and shoulder stiffness—may develop slowly. The sooner the symptoms of whiplash appear, the more serious the injuries tend to be. Sometimes whiplash will appear in the first few days following the accident, go away, but then come back several days later. Whiplash can be associated with other spinal conditions such as osteoarthritis (bone and joint pain) and premature disc degeneration (faster aging of the spine). 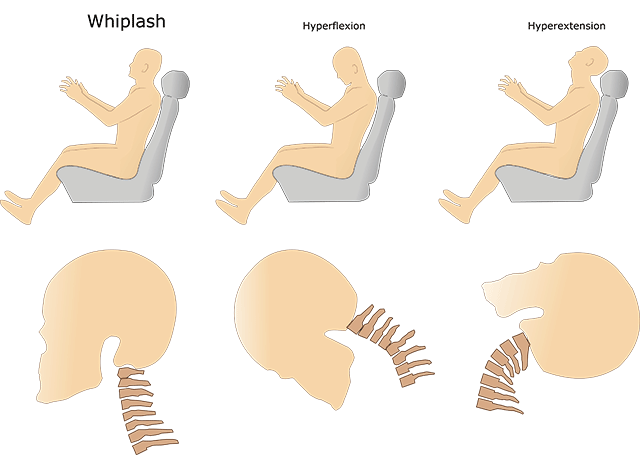 Signs and symptoms of whiplash

If you’ve been in an accident that caused hyperextension and hyper flexion, you may have whiplash if you begin to experience symptoms that include:

If this describes your situation, you should consult a doctor promptly. The sooner you seek medical treatment, the better your chance of recovery. It will also help you avoid a gap in treatment that might harm your chance of financial recovery in an insurance claim or lawsuit.

For the immediate treatment of whiplash, doctors recommend that you should take either acetaminophen (Tylenol) for pain relief or an over-the-counter non-steroidal anti-inflammatory drug (NSAID) such as aspirin, ibuprofen (Advil, Motrin), or naproxen (Aleve). For more serious whiplash injuries, the doctor may prescribe pain relievers containing codeine (such as Vicodin or Norco), as well as prescription muscle relaxants.

To reduce possible inflammation, as soon as possible after the accident, apply a cold compress to the back of your neck for 20 minutes every hour while you are awake and lying down. A package of frozen peas wrapped in a washcloth works nicely.

A day or two after the accident, begin treating the back of the neck and shoulders with heat, such as a heating pad or a moist towel warmed in the microwave.

For three to four weeks after the injury, you should avoid lifting or carrying anything heavy or participating in sports.

Not too long ago, a person who suffered from whiplash was given a neck brace and told to wear it for three to four weeks to immobilize the area. Today, if a collar is prescribed for you, the doctor will usually limit how long you should wear it, as we now know that soft tissue injuries respond better to physical therapy and stretching exercises.

Today, we know that early range of motion and exercises lead to a more rapid recovery than prolonged immobilization or use of a cervical collar. These exercises generally involve rotating your head from side to side, and bending your neck forward, backward, and to the sides. You may also be referred to a physical therapist for treatment. Nevertheless, if you experience pain when you move your head, or the pain involves your shoulders or arms, the doctor may prescribe a soft neck collar for use as needed.

The doctor may inject you with a corticosteroid medicine or lidocaine (a numbing medicine) into painful muscle areas to relieve the muscle spasms that can arise from a whiplash injury.

For most victims, the symptoms of whiplash usually subside in three to four weeks, although it may take up to three months to become completely symptom free. If symptoms continue or worsen after six to eight weeks, further x-rays or other diagnostic testing—such as a CT scan or an MRI—may be necessary to assess whether the person suffered a more severe injury.

For some people, regardless of how intensive their physical therapy and their medications, whiplash results in long-term symptoms that can be extremely painful and disabling. Between 15 percent and 40 percent of people who suffer whiplash will continue to have pain months after the injury occurred. There is an 18 percent chance that a whiplash victim will still be experiencing some symptoms after two years.

Rather than seeing a medical doctor, you may seek treatment by alternative health professionals. You may choose to see an osteopath (D.O.), a medical doctor who uses a more systemic approach to musculoskeletal disorders. Another option is to see a chiropractor or acupuncturist. Another option is deep-tissue massage, if your doctor says it is safe.

Your health care provider may recommend the use of a TENS unit. TENS stands for transcutaneous electrical nerve stimulation. A TENS unit sends a mild electric current to the skin, which decreases some types of pain by interfering with the transmission of the body’s pain signals. Treatment with a TENS unit can help relieve chronic neck pain, but only when combined with exercise. Ultrasound may also be used to treat your injury.

Although you can’t prevent a car from rear-ending you, you may be able to reduce the severity of whiplash by properly positioning the headrest of your seat. For a headrest to give maximum protection, the head restraint should be positioned directly behind the head. If the head restraint is lowered below the level of the head, it could force the head into further hyperextension after an impact. The middle of the headrest should be even with the upper tips of your ears.

If you see a crash coming – possibly in your rear-view mirror —and have time to react, lean back so your head touches the headrest and don’t tense your muscles. This will minimize the whiplash effect.

Some car manufacturers have begun to install various whiplash protection devices in their cars to reduce the risk for and severity of a whiplash injury in the form of “active head restraints” and “whiplash prevention systems.” Additionally, automobiles with good rear-crash ratings are better at reducing the effects of whiplash.