Would You Ride a Flying Motorcycle?

Home / Motorcycle Info / Would You Ride a Flying Motorcycle?

In a prior blog post, we delved into the latest motorcycle trend, electric motorcycles. Now, we’re hearing about another futuristic trend: the flying motorcycle. It’s not science fiction – it’s a billion-dollar industry called urban air mobility (UAM). Would you ride a flying motorcycle?
In 2017, Dubai police in United Arab Emirates debuted the “hoverbike” by California company Hoversurf, which makes electric vertical take-off and landing (eVTOL) vehicles. In March 2019, Hoversurf presented Dubai police with the first production unit of the S3 2019. They will be training officers to operate these flying motorbikes, with a goal of having crews using them by 2020.
The Hoversurf hoverbike resembles the speeder bikes in Return of the Jedi. Maybe not so coincidentally, another California company is starting to take pre-orders for a similar eVTOL vehicle called the “Speeder.” 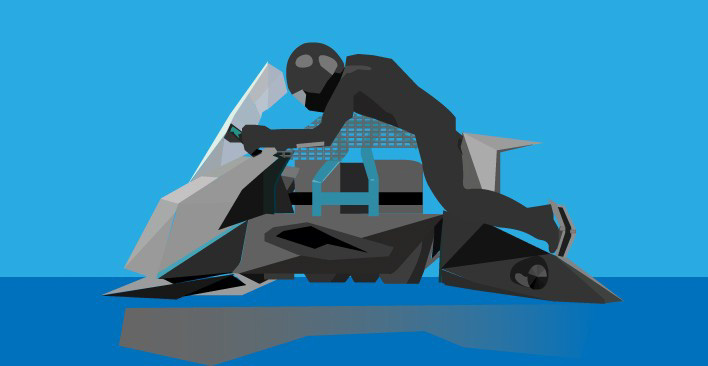 JetPack Aviation, which, as you might have guessed, manufactures jet packs, says their eVTOL concept vehicle will debut in 2020. The Speeder, which looks very much like a flying motorcycle, will take off and land vertically, and will reach speeds of 150mph and altitudes of 15,000 feet. It uses a throttle and joystick like a video game controller, and can be operated autonomously or semi-autonomously.
However, it will have a short range, only 30 miles, and a big price tag: $380,000.00. (You can get a Hoversurf S3 2019 for a measly $150,000.00.)
A Texas company called Lift Aircraft says they will be offering rides on their multirotor drone this year. The “Hexa,” with 18 propellers, also takes off and lands vertically, is controlled by a joystick and iPad. If you’re in the Austin area later this year and have a spare $250, you might be able to take one for a 15-minute ride.
These are only a few companies creating personal flying machines these days. Companies like Boeing, Bell Helicopter, Uber, and Airbus are others entering the airspace with plans to build flying cars, air taxis, and other hybrid/electric-powered aircraft for personal use and air transportation services.
With dozens of companies seeking to launch flying vehicles in the not-so-distant future, we wonder: how will this brave new world be regulated? 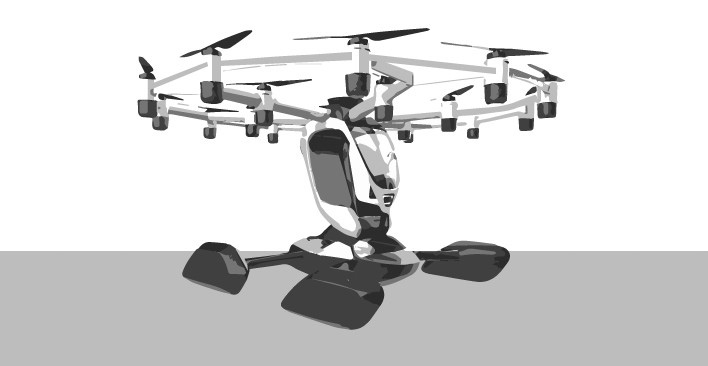 Regulating Public Safety and Airspace for the Flying Motorcycle

We already know how dangerous automobiles are, and they travel on the ground, at speeds under 70 mph, mostly. With personal aircraft whizzing thousands of feet above our heads, at speeds exceeding 150 mph, the risk of catastrophic accidents is exponentially greater. The danger is not just to the passengers of flying motorcycles and other UAM vehicles, who assume the risk of flying one. Innocent bystanders on urban streets could be killed by crashing aircraft.
Airspace control will be vital. Current air traffic control systems are not sufficient to regulate the type of volume predicted by the UAM industry. Innovative technology will be needed to protect the general public.
The Federal Aviation Administration (FAA) oversees Standard Airworthiness Certification Regulations for all aircraft operating in U.S. airspace, including unmanned drones. Currently, they consider “powered ultralight” aircraft to be for recreational purposes only. There is no pilot’s license required to operate these vehicles; however, their operation is limited to daylight hours and open areas, not populated urban spaces.
However, the UAM industry has already begun lobbying for that to be changed. The FAA is considering how eVTOLs will be governed under Title 14 of the Code of Federal Regulations. Will they be considered under Part 23, the current certification standard for light aircraft? Or will they need to have stricter regulations like Part 29, for “transport category rotorcraft,” or helicopters?
Right now, the accident rate for civil helicopters is one crash per one million flight hours, which seems pretty safe. However, eVTOL system architects estimate that within a decade, there will be more than 50,000 of their vehicles, each flying 3,000 hours annually. That’s 150 million flight hours, over highly populated areas. At that rate, the result would be 150 crashes per year raining on our “smart cities.”
This is not an acceptable risk. Designers of personal aircraft must aim for a far better safety rate, given the nature and the number of operating vehicles they predict.
Dan Elwell, the FAA’s acting administrator, told Flying magazine that the agency will not cut the eVTOL industry any slack when it comes to passenger safety.
In 2017, NASA (National Aeronautics and Space Administration) posted an article embracing Urban Air Mobility. They have offered to work with the UAM community, and the FAA, to create more adaptive air traffic control systems, industry standards, and government regulations. We say, the sooner the better.

Another issue facing the UAM industry is battery capacity. Losing power is a major safety issue when you’re traveling 1000 feet above the ground.
Then there is that pesky matter of physics.
Current electric propulsion engines simply don’t meet eVTOL needs. Unlike jet engines, which actually improve in efficiency as burned fuel decreases weight during flight, battery-powered vehicles become less efficient during flight. The energy density of a battery is about 50 times less than gasoline or jet fuel, which significantly limits journey time and range.
Until scientists can create a battery that can power a light aircraft for more than minutes at a time, the concept of flying motorcycles may not get off the ground, and be nothing more than a social media novelty.

As new transportation trends emerge, TorkLaw will be looking out for your safety. If you have been injured in an accident on the road, an aviation accident, or by a defective product, we can help you recover what you need to keep on moving. Call us for a free, no-obligation consultation today.