California fire attorneys were busy in 2017, the worst year for fires in California history. The current spate of fires in Southern California is only the latest chapter.

The main cause seems to have been an unusually wet spring resulting in extensive vegetation growth, followed by a very warm, dry autumn with strong Santa Ana winds. Combined, these factors increased the risk of fires and intensified their growth.

The first burst of extreme fire weather conditions occurred in Northern California in October and led to an outbreak of unusually strong wildfires. Several large wildfires started the night of October 8, and they spread rapidly over the next several days.

Altogether, these fires killed more than 40 people, burned a quarter of a million acres, and caused several billion dollars’ worth of property damage. One blaze, the Tubbs Fire, killed more than 20 people and destroyed more than 5,000 structures — the most destructive fire in state history.

The Southern California fires began last week, during another period of intense Santa Ana winds. So far, there has been one death, and they have burned an even larger area than the NorCal fires. The Thomas Fire, the fifth-largest wildfire in California history, burned over 230,000 acres and still burning largely out of control in Ventura and Santa Barbara counties. It might take weeks before it is extinguished entirely.

The state and federal governments have recognized a state of emergency in Southern California, and firefighters from several states are coming in to fight the Thomas Fire, so there is hope that they will all be contained soon.

But what legal issues will arise from the flames?

The first, and most obvious, type of legal ramification of the California fires are criminal charges for those who may have deliberately set them. Recently, one of the smaller Southern California fires was found to be arson-related, while another would-be arsonist was detained by a citizen in Anaheim.
Punishments for arson vary, depending on the severity of the offense in question. Aggravated arson may result in life in prison. If someone is killed in the fire, the arsonist may face manslaughter or murder charges, which could also lead to a life sentence or even the death penalty.

But criminal punishments aren’t the only way the law deals with fires. 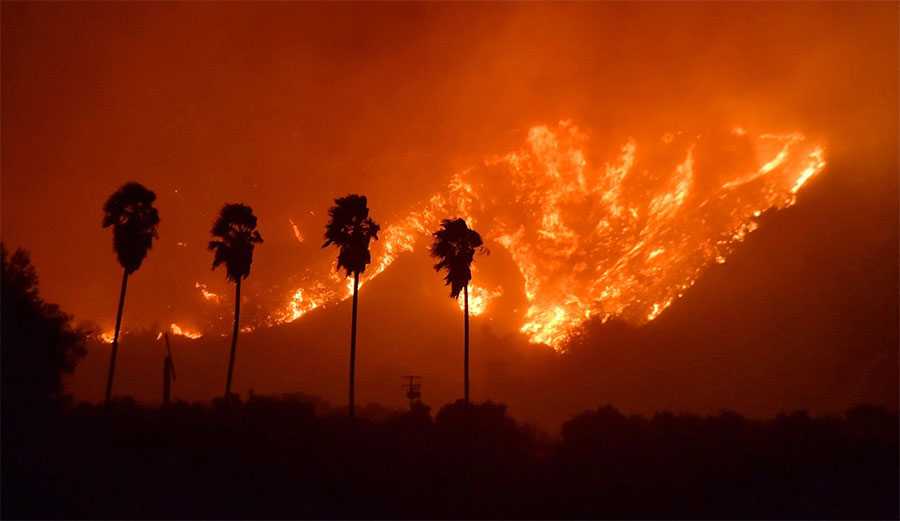 Victims of fires, in many cases, are also eligible to file civil lawsuits to seek compensation for their losses.

Often, these suits don’t involve arsonists at all. Most fires are started by other causes, and even if the fire was deliberate, arsonists are typically not wealthy enough to cover all the damages of the fire (thus, ironically, making them “judgment proof”). Instead, if a person or entity behaved in a negligent way, and their negligence caused or contributed to a fire that caused loss, they may be held liable.

In fact, a series of lawsuits have already been filed against the utility Pacific Gas and Electric by several families who lost their homes or suffered injuries in the Northern California fires. They allege that PG&E did not properly maintain its power lines, which collapsed and sparked the fires.

PG&E disputes this assessment, and claims that the fires were started by a third party. This dispute may be litigated for a while before it comes to any sort of conclusion.
The third type of legal issue involved in fires might strike even closer to home.

If your house has been damaged or destroyed in a fire, and you have a fire insurance policy, you may file a claim with your insurer.

You should file as soon as possible after the loss. This claim should be somewhat detailed, and include a list of all property you have lost. Compiling this list may take some time and effort on your part. In fact, you should keep as much documentation as you possibly can throughout the entire process, and protect any undamaged property from further damage.

If you are truly bereft of even the most basic necessities after a fire, you should ask request a cash advance from your insurer. Be aware that the advance will be taken out of your final amount of compensation, so you should take only enough for your immediate needs.

After the fire, the insurer may hire a private fire investigator to come to their own conclusion about the source of the fire. This investigator is separate from the fire department’s official investigation team, and may even come to a different conclusion.

Don’t worry too much, though: with a large fire such as the Thomas Fire, whose origin is well-documented, you are not likely to come under suspicion. In fact, you may face the opposite problem: the insurer may close the claim too quickly, and miss some damaged or destroyed property. You want the claim resolved in good time, of course, but you should take as long as you need to compile an accurate list of all your property.

No matter what happens, the process of losing your property in a fire is always difficult, and the process might be confusing, and overwhelming. Consider speaking to a personal injury attorney, who can help you with all the details, so you can focus on putting your life back in order.

At TorkLaw, your consultation is free. If you’re experiencing any trouble with your claim or the insurance company, an attorney can help you recover the compensation you need and deserve.