Drowsy Driving is as Dangerous as Drunk or Distracted Driving

Thirty-five percent of American adults don’t get enough sleep, according to the Centers for Disease Control. That means there are nearly 84 million sleep-deprived people at work, at school and on the road every day.
Why is that a big deal? People may not realize just how risky drowsy driving is.
[bctt tweet=”A drowsy driver is just as dangerous as a drunk or distracted driver.” username=”torklaw”]

Many studies show that driving while fatigued is similar to driving under the influence of alcohol. Reaction times, situational awareness and attention span all worsen the drowsier the driver is.
The Centers for Disease Control report that staying awake for more than 24 hours is the equivalent of having a 0.10 percent blood-alcohol concentration (BAC) – above the legal limit to drive.
A U.S. Department of Transportation survey showed that drivers who had six hours of sleep were 1.3 times more likely to cause a collision than drivers who have slept seven to nine hours. Drivers who slept five hours were 1.9 times more likely, and those who with only four hours of sleep were 2.9 times more likely to crash.
The numbers spike after that: drivers who reported sleeping fewer than four hours were 15.1 times more likely to cause a crash. This is comparable to a .12 BAC: 1.5 times the legal limit.
This AAA Foundation report showed a similar increase in crash risk for every hour of lost sleep. 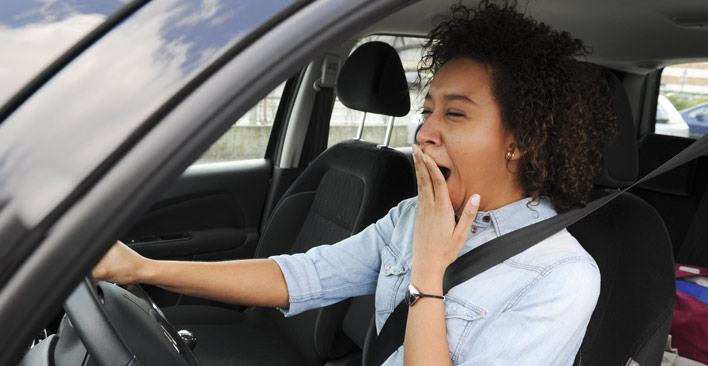 We know that driving while fatigued is a bad idea. But how prevalent is it, really?
The National Highway Traffic Safety Administration (NHTSA) tracks data on motor vehicle crashes, injuries, and fatalities from police and hospital reports. NHTSA’s 2015 data shows 90,000 police-reported crashes involved drowsy drivers. These crashes caused an estimated 41,000 accident injuries and more than 800 deaths.
However, most people familiar with traffic safety and sleep science agree that the real number is higher.
A study by the AAA Foundation for Traffic Safety had trained crash investigators examine those police reports and interviews with drivers and passengers to create a more accurate estimate. Their method suggested that in fact, there are around 328,000 crashes caused each year by drowsy drivers. That’s more than 350% higher.
The study also estimates there are about 109,000 drowsy-driving accident injuries and about 6,400 fatalities caused by fatigued drivers.

Who are all these fatigued drivers?

You might be surprised to discover how many people regularly drive while fatigued. According to the American Sleep Foundation, sixty percent of adult U.S. drivers admit to driving drowsy at least once in the past year. Thirty-seven percent admit to falling asleep behind the wheel, and thirteen percent of those folks fell asleep while driving at least once a month!
Those people most likely to drive while fatigued are adults between the ages of 18 and 29. Men are more likely than women to drive drowsy, and two times as likely to fall asleep while driving. Adults with children and shift workers are also more likely to drive fatigued.

These factors are most commonly associated with drowsy-driving car crashes:

1. In the periods between midnight and 6 a.m., and in the late afternoon, people experience dips in their circadian rhythm—the internal process that regulates our sleep-wake cycle. Car accidents related to fatigue happen most often during these times.

2. Most drowsy driving accidents involve a single driver with no passengers. Being alone in the vehicle, the driver may fall asleep at the wheel: in most of these accidents, they run off the road at high speeds, without braking.

3. Drowsy driving accidents are more likely to happen on rural roads and highways – long stretches of road that don’t require much stopping or turning. 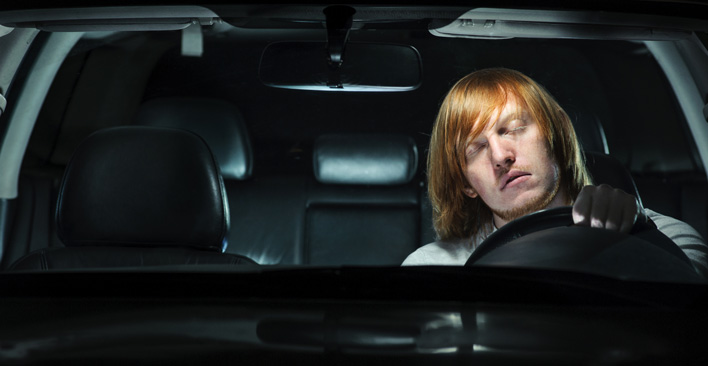 Considering how often it happens, it’s possible that many drivers don’t even know when they are fatigued. Learn the signs and how to prevent it from happening to you.

If you experience more than one of the following symptoms, you may be at risk of driving fatigued:

Even if you don’t fall asleep, you may experience instances of micro-sleep — a short, involuntary period of inattention. Within only four to five seconds of inattention, at highway speeds, your vehicle travels the length of a football field. 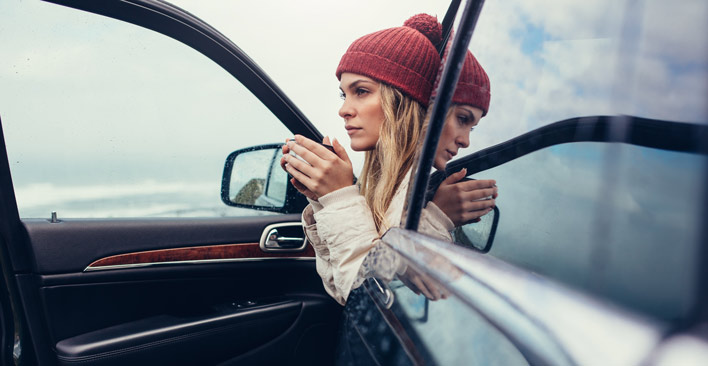 If you notice these signs before you get behind the wheel, you may want to consider alternatives to driving. For instance, use a ride-share, take public transportation, or ask someone else to drive. If you can, take a 20-minute nap before heading out. Sometimes drinking coffee or energy drinks might help you feel more alert, if your drive is short.
If you start to get sleepy while you’re driving, pull off the road when you come to a store, restaurant, or well-lit area. Drink one to two cups of coffee, or if you feel safe, take a 20-minute nap.

TorkLaw wants you to stay safe behind the wheel – but we know that you can’t control other drivers. If you’ve been injured in an accident caused by a fatigued driver, contact us. Our personal injury attorneys will work with you to make sure you receive compensation so that you can fully recover, and rest assured you’re being taken care of.