On January 1, 2018, Proposition 64, the Adult Use of Marijuana Act, took effect in California, legalizing recreational marijuana within the state for adults over 21. Many questions remain about exactly what is and isn’t allowed by law — particularly regarding how marijuana use pertains to driving.

What Are the Effects of Marijuana On Driving?

While researchers have been unable to establish a clear link between marijuana and reckless driving, it clearly impairs functions necessary for driving safely, such as reaction time, decision-making ability, coordination, perception, and visual tracking.
How many accidents do high drivers cause? Even the experts aren’t sure. A recent study by the Highway Loss Data Institute found that in states where recreational cannabis is legal (Colorado, Oregon and Washington), vehicle collisions increased 3%. The same study, however, acknowledges that overall results are mixed, and so far, there is no definitive connection between marijuana use and vehicle accidents.
A recent meta-analysis found that high drivers are more likely than drunk drivers to be aware of their own impairment, which makes them less likely to get behind the wheel in the first place, and more apt to correct for their impairment if they do. While drunk drivers tend to speed and follow cars too closely, high drivers tend to drive more slowly and leave a greater following distance.
The risk of accident increases substantially when users combine marijuana and alcohol. Marijuana prolongs the effects of alcohol, and alcohol increases the absorption of marijuana into the body. Studies show the magnified effects of combining alcohol and cannabis are dangerous even when you’re not driving.

What Does the Law Say About Driving High?

Laws prohibiting drunk driving also apply to drugged driving, and the penalties include fines, imprisonment, and/or driver’s license suspension.
However, there is not yet an agreed-upon definition of marijuana impairment and no accurate roadside test for marijuana levels in the body. Part of the difficulty is that tetrahydrocannabinol, or THC, the psychoactive ingredient in marijuana, does not correlate as closely with actual impairment as alcohol does; it can stay in someone’s system for days after use, and it affects different people in different ways.
California Vehicle Code 23152 simply says that it is against the law for anyone under the influence of alcohol or drugs to drive a vehicle. The law doesn’t explicitly define “under the influence of drugs,” making it subjective to a number of different factors. 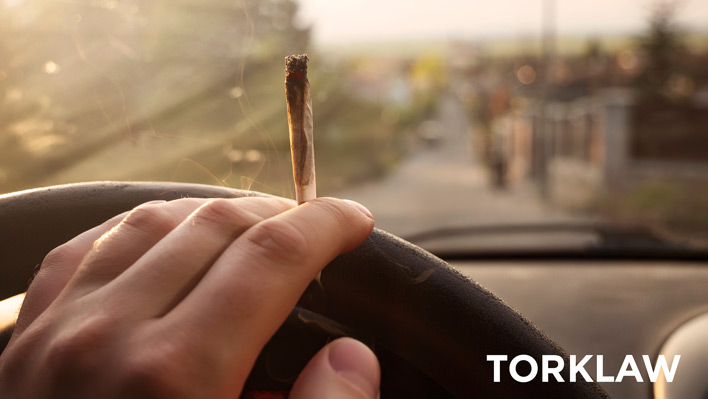 How do Police Detect High Drivers?

The main clue that tells police officers you are driving under the influence of marijuana is erratic driving. It is also illegal for drivers or passengers to consume marijuana in a moving vehicle, so you may be pulled over if a police officer witnesses you smoking what is clearly a marijuana cigarette. If the officers have reason to suspect you are high — such as red, watery eyes and dilated pupils — they will perform a series of field sobriety tests that are similar to the ones for alcohol.
A Drug Recognition Expert may also be called upon to perform a 12-step test to detect symptoms of impairment. If they are present, you may be subject to a blood, urine, saliva, and/or breath test. Because California has no specific threshold for impairment, the physical test results will be used with other evidence (including erratic driving, physical symptoms, and the results of field sobriety tests) to argue that you were driving impaired.

Can I Drive With Marijuana In the Car?

The laws on driving with weed in the car are consistent with those for alcohol. You may not have an open container of cannabis in the passenger compartment of your car, such as marijuana cigarettes, e-cigarettes, or concentrate. It must be in a container with an unbroken seal; previously open containers must be stored in the trunk. Users with valid medical marijuana ID cards may have previously opened containers of cannabis in the passenger compartment, if they are resealed or closed.
If you are pulled over with probable cause, the police officer can search anything in the visible interior, including the seats or items on them. If they find an opened container of cannabis, it signals an intent to use the substance, and you may be cited. You can also be cited for any use or possession of marijuana that falls outside the limits of Prop 64. 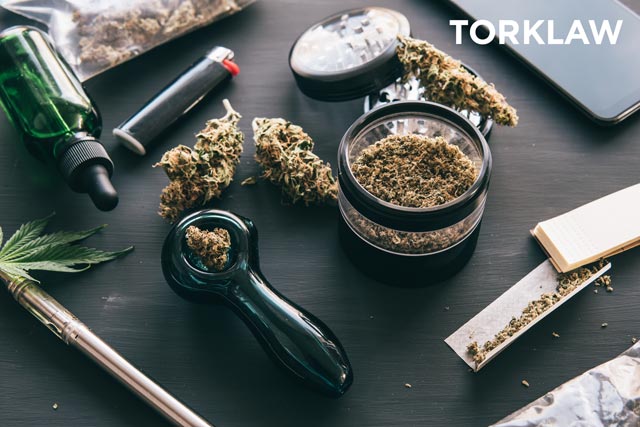 Places In California Where Cannabis is Illegal

Proposition 64 does have some exceptions; just as you cannot use marijuana in a moving vehicle, there are several other places where you cannot consume or possess cannabis.
In public: California law prohibits the consumption of cannabis in public, or within 1,000 feet of a school, day care, or youth center, while children are present. This applies even if you are parked in your car.
On federal property: Because cannabis is still illegal at the federal level, you may not use or possess marijuana in a national park, even if it is within the state of California. It is also illegal to carry marijuana across state lines, even if you are going to and from states where it is legal.
Given the subjective nature of California law on marijuana impairment, marijuana users should never drive while or even shortly after using, both for their own sake and for those who share the road with them. Even the pro-legalization National Organization for the Reform of Marijuana Laws (NORML), says in its Principles of Responsible Cannabis Use, that a responsible marijuana user should never operate a motor vehicle or heavy machinery while impaired.
If you have been injured in an accident with someone driving under the influence of marijuana or any other substance, TorkLaw may be able to help you receive the compensation you need. Give us a call for a free consultation.