Bicycling in California: What’s Legal (and What Isn’t)

As more Americans focus on creating a healthy lifestyle and reducing their environmental impact, bicycling is on the rise in the U.S. Still, many motor vehicle drivers are not used to sharing the road with bicycles, and may be annoyed by certain things cyclists do that are, in fact, perfectly legal.
Laws may vary from state to state — it’s important for cyclists and drivers alike to know the specific vehicle codes in their area. Below are the laws regarding bicycles in California.

1. Bicyclists May Ride in the Roadway – and Drivers Must Give Them Three Feet for Safety

According to California Vehicle Code (CVC), bicyclists may ride on any public road that is open to motorists, except for freeways, or where explicitly prohibited. Cyclists on the roadways must ride in the same direction as motor vehicle traffic.
If cyclists are moving as fast as the traffic, they may ride in the middle of a lane. If they are impeding traffic, CVC 21654 requires them to stay as close to the right-hand side of the road as practicable. CVC 21656 defines “impeding traffic” as riding in a roadway where passing is unsafe, with five or more motor vehicles behind them. In that case, the cyclist must move to the right and allow the vehicles to pass.
When a motor vehicle passes a bicycle, according to the “Three Feet for Safety Act,” the vehicle must leave at least a 36-inch distance between them.
Many drivers believe that bicycles should ride on the sidewalks; however, depending on the city, this may be illegal. California law allows riding on sidewalks and through crosswalks, unless prohibited by local ordinance. Many California cities have banned sidewalk cycling in business districts. (Motorized bicycles or scooters may NEVER be operated on a sidewalk.)

2. Bicyclists May Ride Two Abreast When Traveling at the Speed of Traffic, or When/Where It Is Safe for Drivers to Pass Them

There is no language in California law that prevents bicyclists from riding two or more abreast (side-by-side). If they are moving at the speed of traffic, riding two abreast is legal.
If they are not moving at the speed of traffic, it is still safe for cyclists to ride two abreast, if there is more than one lane going in the same direction, so motorists can pass on the left. However, if cyclists riding abreast impede traffic (see above), they should move over to the right. 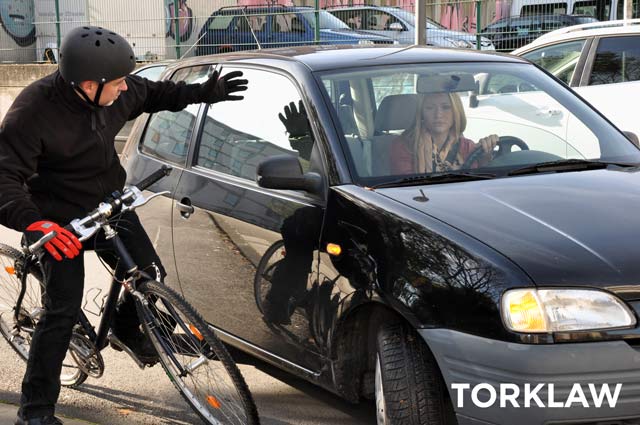 3. Bicyclists May Go Straight in a Right Turn Lane – and Drivers Must “Turn From the Curb”

On streets where there is no marked bicycle lane, cyclists traveling slower than traffic must ride as close as practicable to the right-hand side of the road. This means, whether there is a bike lane or not, they may drive straight through intersections where motor vehicle drivers make right turns.
Whenever a motor vehicle makes a right turn in front of a bicycle, the driver should take great care not to cut off the bike:

4. Bicycles May Use the Left Turn Lane – and Drivers Must Follow at a Safe Distance Until They Can Safely Pass

According to the California Department of Motor Vehicles (DMV), there are two safe ways bicycles may make a left turn:

If you are driving a motor vehicle behind a bicycle in the left-turn lane, be aware that, per CVC 21703, it is illegal to follow a bike (or any vehicle) too closely. While the law doesn’t explicitly mandate a safe following distance, the California DMV handbook recommends the “three second rule”: when the bicycle passes a specific point, begin counting: one-thousand one, one-thousand two, one-thousand three. If you pass the point before you reach three, you’re too close. 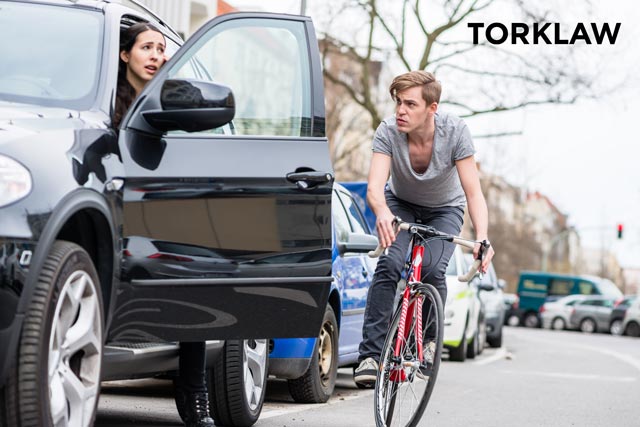 Many cyclists wear body or helmet cameras to document reckless drivers or proof of fault in an accident. It is important to understand that there is a significant legal difference between a visual recording, which is fully protected by the law, and an audio recording, which is regulated under California’s wiretapping laws. California’s “two-party consent” law makes it a crime to record any confidential communication without the consent of all parties in the conversation.
Even if you’re in public, you cannot record conversations between people without their permission, if any person in the conversation has a reasonable expectation that no one is able to overhear them. Now, if people are shouting without apparent concern for who hears them, you may have the right to record, depending on the situation. But be careful, especially when sharing the recording: violating the wiretapping law can lead to criminal prosecution and/or a civil lawsuit against the individual who created the recording.
You are completely safe to record video of people interacting in public, if your video does not capture audio, and the subject of the conversation is not apparent.
You also have the right to photograph, or record audio or video of police officers or other public officials engaged their official duties, if they are done in public, as this cyclist did.
If you or someone you love has been injured in a bicycle accident, it’s important to speak with one of our attorneys to learn about your rights. Use the form below to schedule your free consultation, or call us at 888.845.9696.