Truck Underride Crashes A Major Cause of Death on U.S. Roads

Truck Underride Legislation Has No Traction

In the early morning hours of June 29, 1967, a Buick Electra carrying actress Jayne Mansfield, her lawyer, driver, and three of her children was traveling on Interstate 90 from Biloxi, Mississippi to New Orleans. A cloud of fog obscured the road, and when the mist cleared, a tractor-trailer loomed before them. The Electra ran, full speed, under the truck. The top of the car was sheared off and the three adult passengers were killed. Thankfully, the children, asleep in the back seat, survived with minor injuries.
Fifty years later, while automobile safety has been revolutionized with features such as anti-lock brakes, front and side airbags, backup cameras, automatic emergency braking, blind spot warning, lane assists, etc. — little has been done from a regulatory standpoint to protect people from truck underride crashes. 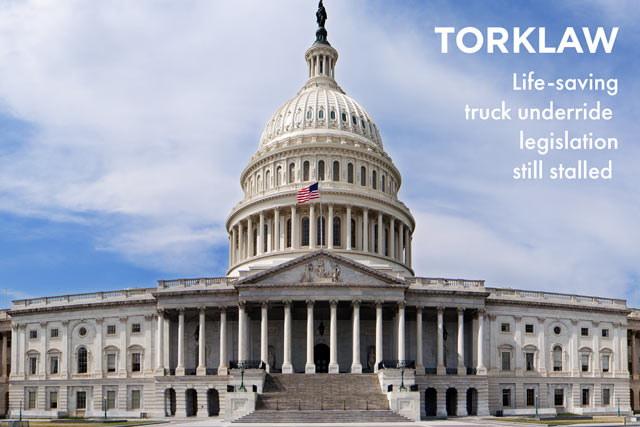 In January 2017, The Stop Underrides Act was introduced in Congress by Representatives Steve Cohen (D-Tennessee) and Mark DeSaulnier (D-California), and in the Senate by Kirsten Gillibrand (D- New York) and Marco Rubio (R-Florida). Since that time, that piece of legislation has been sitting in the U.S. Senate Committee on Commerce, Science and Transportation without lawmakers taking any action.

The History of Underride Legislation and Regulation

Truck underride legislation has existed since 1953, when they were made mandatory for large tractor-trailers. The first standard required trucks with cargo beds that were 30 or more inches off the ground, and rear tires 24 or more inches from the rear of the cargo bed, to have underride guards with a minimum rear guard height of 30 inches from the ground. Certain vehicle/body types were exempted.
After Mansfield’s 1967 death, the Department of Transportation’s National Highway Traffic Safety Administration (NHTSA) recommended enhanced requirements and more stringent testing for underride bars. In a 1969 Notice of Proposed Rulemaking (NPRM), the Federal Highway Administration said, “It is anticipated that the proposed standard will be amended, after technical studies have been completed, to extend the requirement for underride protection to the sides of large vehicles.”
However, the recommended standards were never amended, and the process was abandoned in 1971 with no changes made.
In 1977, the Insurance Institute for Highway Safety (IIHS) conducted a series of tests to show that the 1953 underride laws were inadequate, and would result in catastrophic injuries during collisions at even moderate speed. The 1977 IIHS recommendations were presented to the U.S. Senate, and as a result, federal officials drafted an underride standard of a 24-inch road clearance (from 30 inches), and a structural strength requirement.
Those standards, inexplicably, were not passed into law until 1998. Largely unchanged (the clearance was lowered to 22 inches), these standards were passed without any evaluation of the two decades of changes to American cars and trucks. A 2010 IIHS study concluded that 50% of the underride collision tests resulted in catastrophic damage to the passenger compartment. The study also revealed problematic exemptions to the regulations that would exempt dangerous trucks from requiring underride guards.
In response, the NHTSA issued another NPRM on December 16, 2015 to adopt the more stringent, but highly workable Canada Motor Vehicle Safety Standard, which requires rear impact guards to be able to protect passenger car occupants in collisions up to 35 miles per hour. However, as of August, 2017, the NHTSA was still “actively” pursuing the matter.
The IIHS has also been petitioning the NHTSA to pass new regulations requiring side guards, which are currently optional for all tractor-trailers, regardless of clearance, which IIHS crash tests show would save lives by preventing vehicles sliding underneath them. However, according to WUSA9, a local news site in Washington, D.C., an officer with the IIHS claims that the NHTSA said that, based on their cost-benefit analysis, “side underride countermeasures have been determined not to be cost-effective,” because the cost of installing side guards was more than the “value of a statistical life.” 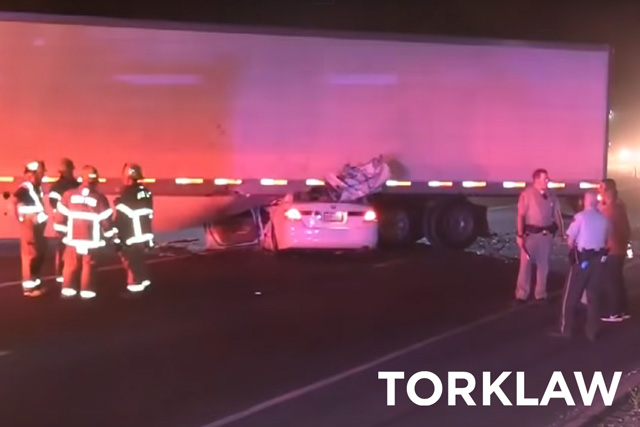 Why is Truck Underride Legislation Needed?

Considering that the current standards for truck underride protection are over 40 years old, it is not surprising that they do little to protect modern automobiles. While most collisions involving large trucks cause major property damage and serious injuries, truck underride accidents are frequently fatal, because the car’s crush zones, the structural areas designed to absorb energy upon impact, don’t protect the occupants in underride collisions, and often, the airbags do not even deploy.
Between 1994-2014, there were 5,081 fatalities due to underride crashes. That’s an average of more than one person per day.
A 2017 IIHS report showed that there were 2,157 passenger vehicle occupant deaths in two-vehicle collisions with large trucks. Of these, 476 involved cars hitting the rear of trucks. 267 died when the cars went head-on into the side of a truck. And 674 passengers were killed in front-to-front collisions with trucks.
That’s a lot of statistical lives.
Related: How to contact your congressional representative

What Would Truck Underride Legislation Do?

The still-pending Stop Underrides Act of 2017 would amend federal transportation law to require all trailers, semi-trailers, and single unit types of trucks with a gross vehicle weight rating of more than 10,000 pounds to install rear underride guards that meet specified performance standards. It would also, after a specified period, require the same types of vehicles to install side underride guards that meet specified standards.

Naturally, the most deep-pocketed opponents of the bill are those in the trucking industry, who say that the required panels would add too much weight to trucks, which would not be able to haul as much. Currently, truckers can haul up to 80,000 pounds. The rear and side guards would reduce their hauling capacity by up to 1600 pounds. There is also a concern that the added weight would diminish fuel mileage, and make the trucks less navigable in tight spaces.

There are countless examples of underride fatalities and injuries; here are two that have received a lot of attention:
On May 4, 2013, the Karth family, was driving through Georgia, and were struck by a semi-truck that did not stop in time for slowed traffic. Their car spun and was sent backward into another semi. The rear underride guard of that truck failed to prevent the wrongful deaths of AnnaLeah (17) and Mary (13), who were in the back seat and crushed under the trailer.
On Thanksgiving Day 2004, Roya Sadigh was a passenger in her fiancé’s car, traveling on icy roads in Indiana. The car began to slide, and before Sadigh’s fiancé was able to take corrective action, the smaller vehicle slid under the side of the tractor-trailer in the next lane. Sadigh was crushed under the wheels of the truck – a side guard, as recommended by the NHTSA in 1969, would probably have saved her, if any action had been taken in the intervening 35 years.
Marianne Karth, the mother of AnnaLeah and Mary, and Roya Sadigh’s mother Lois Durso have become crusaders in the attempt to clear the legal gridlock around underride legislation with a goal to prevent the types of avoidable situations that took their daughters’ lives.

In March 2017, the IIHs launched a new safety ranking system for truck trailers called the Toughguard Award, which recognizes North American truck manufacturers with good rear underride protection on some or all of its trailers. Current winners can be found on this page. The IIHs has also been actively testing side underride guards, and have issued a press release announcing the benefits of the AngelWing Side Underride Protection Device from Airflow Deflector, Inc.
The technology exists. The question is, when will we have truck underride legislation requiring the trucking industry to use it?
As the Karth and Durso families can attest, underride crashes are frequently deadly and almost always traumatic. If you have been injured or lost a family member in an underride crash, or any type of accident caused by negligence or inadequate prevention, contact TorkLaw. Our experienced personal injury attorneys can help.