TorkLaw has been retained by a client whose beloved 4-month old child suffered a wrongful death due to the unsafe Fisher-Price Rock ‘n Play “Sleeper.”
The Rock ‘n Play product violates all of the American Academy of Pediatrics’ medically evaluated “ABC” safe-sleep guidelines for babies, which recommend that infants only sleep Alone, on their Backs, in a Crib with a firm mattress/surface, and not to use bumpers, blankets, or toys that can smother the infant.
Instead, the Rock ‘n Play places the baby in a soft cocoon-like holder at a 30-degree angle, which is inherently unsafe.
Fisher-Price, a subsidiary of Mattel, invented this category of sleeper a decade ago. According to the Washington Post, Fisher-Price did so without any input from knowledgeable pediatricians, or any sort of medical safety testing. The single doctor they consulted has since had his medical license stripped.
Since then, many other manufactures have begun selling similar unsafe inclined infant sleepers. They are all dangerous.
Despite a May 2018 Consumer Products Safety Commission (CPSC) about the risk of death by suffocation when placing infants in inclined sleepers, Fisher-Price continued selling these dangerous until April 2019. It was not until a number of lawsuits threatened Fisher-Price’s bottom line that they finally issued a recall.
In the meantime, 32 precious babies had died while using the Fisher-Price Rock ‘n’ Play product, and thousands more were at risk of suffocation. Moreover, recalls are seldom effective for those who have already purchased the product.
On January 30, 2020, Consumer Reports published an article about a CPSC that four more companies (Graco, Evenflo, Sumr Brands, and Delta) recalled their infant inclined sleepers due to the risk of suffocation. This recall affects around 165,000 products that have been sold and may currently be in use in homes across the United States.

If you are a parent or caretaker of an infant, DO NOT use a Fisher-Price Rock ‘n Play sleeper or any type of inclined sleeper. If you have such a product, check the manufacturer website for recall information. To prevent infant death through suffocation, always place the babies to sleep on their back, on a flat, firm surface without soft objects or loose bedding.

If you or someone you know has suffered the unimaginable pain of an infant’s death due to suffocation in a Fisher-Price Rock ‘n Play or similar product, contact the product liability attorneys at TorkLaw right away. Update, December 13, 2019
The Washington Post has reported that Amazon, eBay, Wal-Mart, and Buy Buy Baby have all halted sales of inclined sleepers that incline more than 10 degrees. This was in response to an October 31 warning by the U.S. Consumer Product Safety Commission stating that these infant inclined sleep products have been conclusively linked to at least 73 infant deaths. The Fisher-Price Rock ’n Play Sleeper, which was recalled in April 2019, is linked to at least 32 infant deaths.
A full ban on the sales of inclined infant sleepers awaits the Commission’s final approval. However, on November 4, Consumer Reports issued a recommendation for a recall of all inclined infant sleep products.
See a full list of these products below, as well as recommendations for safely positioning babies for sleep.
[bctt tweet=”ABC=the only safe way for infants to sleep: Alone, on their Back, in a Crib w/a firm mattress. No bumpers, blankets, or toys – and don’t buy inclined sleepers! Read our blog for a full product list & facts.” username=””] 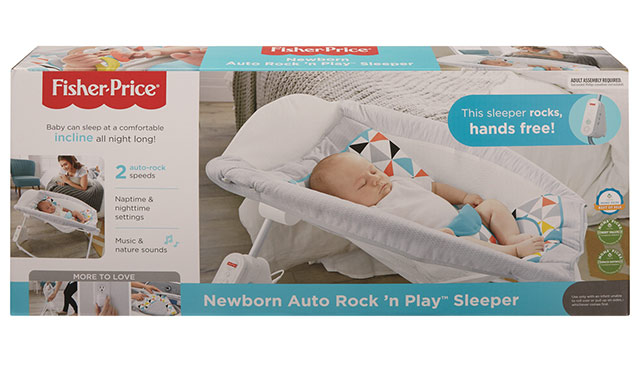 The Fisher-Price Rock’n Play Sleeper, and other infant inclined sleepers, are responsible for at least 73 infant deaths

Update, June 26, 2019:
IMPORTANT WARNING: Infant deaths from inclined sleepers has now risen to 50. If you have or care for an infant, DO NOT USE INCLINED SLEEPERS for prolonged sleep, or anytime the infant is not under the direct supervision of an adult. MORE THAN 50 INFANT DEATHS have been attributed directly to inclined infant sleepers.
If you know of an infant who has died due to an inclined sleeper, it is important to hold the manufacturers these unsafe products accountable. Contact TorkLaw to take action to prevent further infant deaths.
Do not purchase any of the below products, or any brand of inclined sleeper, for use by infants due to the risk of death:

The American Academy of Pediatrics, National Institutes of Health, the Centers for Disease Control and Prevention, and the federal Maternal and Child Health Bureau, and millions of pediatricians and other health experts recommend the ABC’s of sleeping for children under 12 months.
The only safe way for infants to sleep is:

Bare is best for babies! 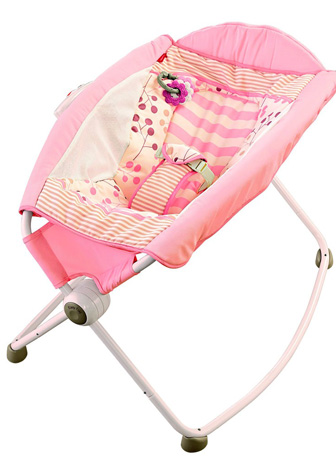 A Fisher-Price sleeper is under recall for infant death, the United States Consumer Products Safety Commission (CPSC) has announced. All models of the dangerous product Fisher-Price Rock ‘n Play Sleeper, 4.7 million of which products have been sold in the U.S., have been recalled.
The CPSC recall notice stated that over 30 babies have died from suffocation after rolling face-down into the soft padding of the Fisher-Price Rock ‘n Play Sleeper. Our hearts go out to the parents and families of these children whose lives were cut short needlessly, including a TorkLaw client.

Inclined Sleepers Not Recommended for Infants

While positioned sleepers like the Fisher Price Rock ‘n Play have been hyped as helpful to babies with colic or gastroesophageal reflux (GERD), the American Academy of Pediatrics (AAP) has strongly advised against placing infants to sleep at an incline, or in products that require safety restraints. Since 1994, with the “Back to Sleep” campaign, now known as “Safe to Sleep,” the pediatricians’ group has recommended that the ONLY safe sleeping position for a baby is on his or her back, on a firm surface that is bare of soft bedding or toys.
The Back to Sleep/Safe to Sleep campaign resulted in a steep decline in crib deaths and Sudden Infant Death Syndrome (SIDS). Because of the evidence that back sleeping prevents SIDS and reduces the risk of unexplained deaths of infants, in 2010, the CPSC proposed a requirement that all infant sleep products be firm and flat, with an angle of 5 degrees or less. This would mean that the Rock ‘n Play, and other inclined infant holders, could not be marketed as “sleepers.”
And in places like Canada and Australia, inclined infant holders are banned from being marketed as “sleepers.” However, in the United States, Fisher-Price continued to market the product’s most dangerous features, the angled positioning and soft padding, as selling points. They also promoted word-of-mouth advertising by “Mommy Blogggers,” who touted their product all over social media.
How did this happen?

Why Are Unsafe Inclined Sleepers Sold in the U.S.?

Consumer Reports magazine investigations discovered that Fisher-Price and others in the infant product industry began lobbying the federal government to relax those standards, and approached ASTM International, an organization that develops and publishes voluntary technical product standards, to create a new category for “inclined sleepers.” The ASTM formed a research committee. The committee’s chairman was Michael Steinwachs – a Fisher-Price engineer highly involved in designing the Rock ’n Play. In 2015, this “committee” established a voluntary standard for infant inclined sleep products, despite evidence of fatal danger to infants.
Another reason is the growing disdain for regulatory action. In 2018, the CPSC issued a “consumer alert” about inclined sleepers without naming specific products, stating that they were aware of 10 infant deaths associated with the products. They recommended that “inclined sleeper” products not be used for babies over three months. Because this warning had been issued, Fisher-Price general manager Chuck Scothon was quoted in the New York Times as saying that the company felt they had met all safety standards.
Our question: if the U.S. Consumer Products Safety Commission was aware that babies were dying due to this product, why on earth did they simply issue a warning rather than a recall? Most parents would not have seen the warning, understood the urgency, or connected the generic term “inclined sleepers” with the Rock ‘n Play product.
Pamela Gilbert was Executive Director of the CPSC from 1995-2001. She was also quoted in the same NY Times piece as noting that there is a dangerous trend to bow to industry pressure and issue warnings when, in fact, recalls are warranted. This distinction is especially important when death is involved: a warning is not enough, especially when there is a need to protect the lives of infants and children.
Tragically, Ms. Gilbert was right. The warnings were not enough, and more babies died as a result. Now that lawsuits are being filed, the CPSC is investigating all inclined infant sleep products; there are 26 companies making them and selling them in the U.S. today. One of these is the Ingenuity Moonlight by manufacturer Kids II, which has been linked to at least one infant death.

If you are a parent, grandparent or caretaker to an infant, DO NOT use a Fisher-Price Rock ‘n Play inclined sleeper or any similar product for long term sleep, or anytime the infant is not within your direct sight. To prevent infant death through suffocation, always place the baby to sleep on a flat, firm surface without soft objects or loose bedding. This is safer for the child even if he or she suffers from gastroesophageal reflux. For more information, see the American Academy of Pediatrics’ Parent’s Guide to Safe Sleep.

There is no pain like the loss of a child. If you know of any infant deaths from inclined sleepers due to suffocation in this or a similar product, or if the child was injured, contact TorkLaw right away. Due to the manufacturer’s knowledge of the dangers surrounding these products, you could be entitled to compensation for your loss and/or damages.
While nothing can ease the pain of an infant’s death, manufacturers like Fisher-Price cannot be allowed to knowingly manufacture and market products they know to be dangerous to the most vulnerable members of our society. They should not be allowed to profit from placing infant lives at risk.