9 Bad Driving Habits that Cause Crashes and Drive Us Crazy

Those of us who commute each day see enough bad driving habits to understand road rage. These habits aren’t just obnoxious, but they are some of the top car accident causes. But, as Gandhi said, “You must be the change you want to see in the world.” So if these bad habits drive you crazy, resolve to stop doing them! And, tweet about your biggest pet peeve below, or leave a comment to tell us about it.

This type of aggressive driving is both dangerous and pointless:

[bctt tweet=”MIT researches say that if we stopped tailgating, we could cut our commute times in half!” username=”torklaw”]

2. Not Using Your Turn Signal

Research by the Society of Automotive Engineers revealed that neglecting to use turn signals may cause more than two times as many auto accidents as distracted driving. The same study found that this bad driving habit is pervasive: drivers don’t use their turn signals almost half the times they change lanes, and a quarter of the time when turning. As a reminder, the law says you must use your blinker in both of those situations, even when “no one’s around.”
[bctt tweet=”Not using your turn signal may cause twice as many auto accidents as distracted driving.” username=”torklaw”]

3. Being “Polite” Instead of Following the Rules 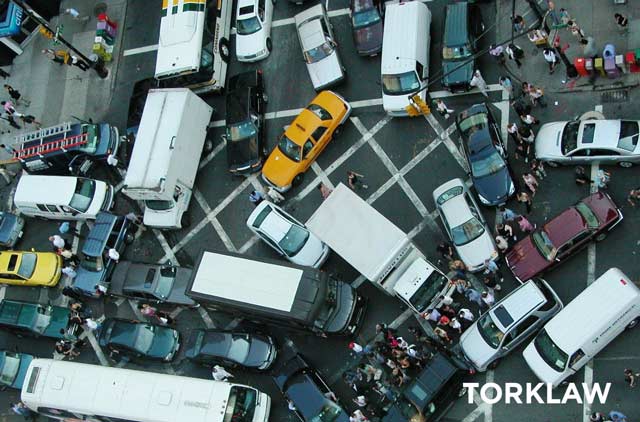 This one can be confusing, but it’s amazing how many people don’t know the basics:

Going back to #3, if you have the right of way, take it; otherwise, it’s confusing to the other drivers.
[bctt tweet=”Know what to do at a 4-way stop? First come, first to go; if you arrive together, yield to the right; left turners yield to cars going straight or making a right.” username=”torklaw”]

6. Not Driving with the Flow of Traffic

Examples are driving too slowly in the passing lane, zipping from lane to lane, or cutting across several lanes to make your turnoff. Drivers who disrupt traffic flow are a hazard to others, and may be ticketed because of it.
In almost every state, the far left lane, or the “number 1 lane,” is for passing. Don’t remain in that lane if you are not driving with the flow of traffic, even if the other cars are speeding. If you want to drive slower than the other cars, move to your right. And while you probably won’t get a ticket if you are driving at or close to the speed limit, driving significantly lower than the speed limit and impeding traffic is a ticketable offense.
However, contrary to popular myth, “driving with the flow of traffic” will not get you out of a ticket if you were speeding.
And if you realize you’re going to miss your exit or are in the wrong lane to make your turn? Get off at the next exit, or go around the block. Don’t endanger all the other drivers for your mistake.
[bctt tweet=”Go with the flow: if you’re not passing, get out of the fast lane!” username=”torklaw”] 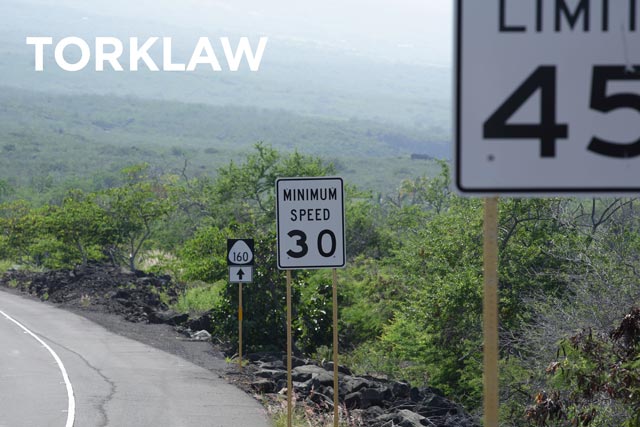 Distracted driving is almost as dangerous as drunk driving. According to the NHTSA, distracted driving resulted in 3,450 fatalities and 391,000 injuries in 2016.
Cell phone usage – whether it’s talking, texting, or using GPS is a common distraction. But it’s not the only distraction. Driving with pets, eating food, grooming, or engaging with other passengers – anything that takes your attention away from the road counts as distracted driving. Hang up, restrain your dog, or pull over if something in your car is keeping you from focusing on the road.
[bctt tweet=”Distracted driving is almost as dangerous as drunk driving. Put down the phone and drive.” username=”torklaw”]

When you’re backing up or changing lanes, it’s important to check your blind spots for other vehicles or pedestrians before moving. Too many drivers, however, only check their side and rear-view mirrors before merging or backing up, leaving the over-the-shoulder areas unchecked. Often, this leads to a collision. Now, with many cars equipped with backup cameras and blind spot detection, drivers are becoming even lazier about this bad driving habit.
Anytime you’re backing up, changing lanes, or merging, you should:

[bctt tweet=”Don’t rely on your mirrors: check your blind spots before backing up or changing lanes. ” username=”torklaw”]

9. Not Knowing How to Drive Near School Buses

If a school bus is stopped and displaying flashing, red lights, this is an indication that children are boarding or exiting the bus, and may be crossing the street. Vehicles driving behind the bus must always stop. On a two-lane or non-divided street, vehicles driving on the other side of the street must also stop. All vehicles must wait until the bus moves again, or until the red light is off, before proceeding.
If the bus driver turns the flashing red light off, it is safe to pass, but do so slowly and cautiously.
[bctt tweet=”If you’re driving behind a school bus, and it stops with the red lights flashing, you must stop and wait. On a two-lane street, so do the cars on the other side. #schoolbussafety” username=”torklaw”]
Safe driving is everyone’s responsibility. If you’ve acquired some of these dangerous driving behaviors, make an effort to change them. Becoming a safer driver will help you live longer, and stop paying insurance companies so much money!
If you’ve been injured in a traffic accident by a driver who performed one of these dangerous actions, call the auto personal injury attorneys at TorkLaw. We have a wealth of experience handling car accident injury cases, and can help you receive the compensation you need to recover. Call us today for a free consultation.