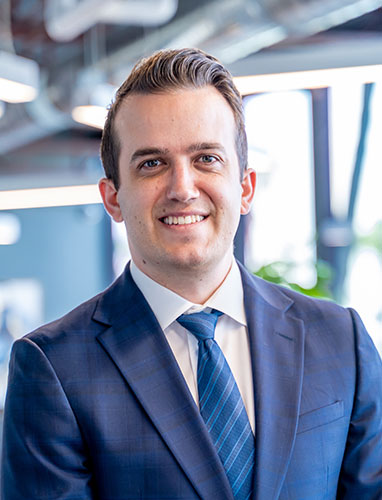 Jeff Crissman is an Associate Attorney at TorkLaw. He grew up in Orange County and graduated from California State University, Long Beach with a Bachelor of Arts degree in Political Science.

At Chapman, Jeff was the vice president of their Mock Trial Team and competed in mock trial competitions, qualifying for the National Competition in Chicago. In addition, while at Chapman, Jeff was an extern for the American Civil Liberties Union (ACLU). In that role, he primarily assisted in responding to complaints of violence against inmates in the Los Angeles County Jail system.

After he was admitted to the California State Bar in 2016, Jeff became an associate attorney at a personal injury firm in Irvine, California. Over the course of his career, Jeff Crissman has negotiated and tried cases that cover the full spectrum of personal injury practice, obtaining millions of dollars in settlements and verdicts for his clients. One of those cases resulted in a $1.1 million dollar verdict for a plaintiff in Los Angeles County.

Jeff believes that law practice is not only being a good orator, writer and negotiator, but also spending time with his clients to ensure they understand the law, their case, and their options so they can make fully informed decisions. He takes pride in developing relationships with his clients and making sure the litigation process is as stress-free and easy for them as possible.

In his free time, Jeff enjoys watching and attending sporting events and spending time with his soon-to-be wife, and his friends.