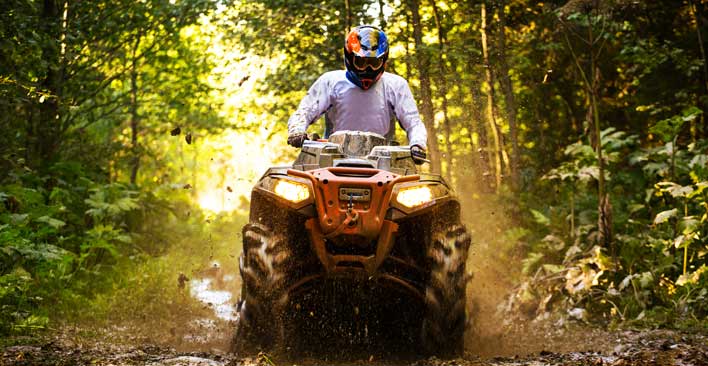 ATV accidents are a common source of injury and death to both adults and children.

All-terrain vehicles, or ATVs, also known as quads, four-wheelers and four-tracks, are motorized vehicles with seats that are straddled by the driver, with handlebars for steering. ATVs have low-pressure tires and are designed for uneven surfaces and off-highway terrain. ATV engine sizes range from 50cc to 660cc. They can weigh up to 600 pounds and go as fast as 75 mph.

ATVs are primarily used for recreation, but are also used in many industries that require all-terrain travel, including border patrol, construction, emergency medical services, land management, law enforcement and military.

Up until 1987, there were also three-wheel models; however, production of three-wheelers ceased in 1987 due to safety concerns – their instability made them more prone to accidents, and these accidents tended to be more severe than those on four-wheel ATVs.

The United States Consumer Products Safety Commission (CPSC) reports that between 1982 and 2016, 15,000 people have died in ATV accidents. More than 3,200 of these ATV fatalities were children younger than 16 – more than 1,400 of the children killed by ATVs were younger than 12.

ATV child deaths are only a small percentage of children who survive injuries on ATVs, many of them catastrophic. The CPSC estimates that in 2015, there were 26,700 ATV-related injuries for children under 16. CPSC Commissioner Robert Adler has stated, “ATVs remain the most dangerous discretionary use product for children within CPSC’s jurisdiction.”

They are no less dangerous for adults. The CPSC’s estimate of all people requiring emergency department treatment for ATV-related injuries in 2015 was 97,200. Five states account for 25 percent of all ATV-related deaths in the U.S: Texas, California, West Virginia, Pennsylvania, and Kentucky, in that order.

We offer these CPSC tips for to avoid ATV accidents:

Don’t Drive ATVs on Paved Roads, Even If It’s Legal

ATVs are designed for off-road terrain. On paved roads, they are difficult to control. Moreover, the presence of other vehicles places them at greater risk for car accidents. In fact, according to the Consumer Federation of America, between 65 to 74 percent of all ATV deaths occur on paved public roadways.

Unfortunately, litigation may be the only way to get these dangerous laws changed. If you have been injured or lost a loved one in an ATV crash that took place on a public road where it was legal to ride, contact an experienced ATV attorney to try to keep this from happening to someone else.

Adult ATVs Aren’t for Kids of Any Age

Yes, we know. Your children are exceptional. Even so, all children, because they are still growing, simply don’t yet have the developmental skills needed to maneuver the faster, more powerful adult-size ATVs. More than 90 percent of ATV child injuries happen because they were not riding an age-appropriate vehicle.

The CPSC, ATV industry, and consumer advocates all recommend that children ages 12 through 15 ride ATVs designed for smaller bodies, with engines smaller than 90 cc.

For their own safety, children under 6 years old should never ride an ATV at all, even as a passenger.

Kids Should Only Ride ATVs When Supervised

Children of all ages should only ride ATVs when they are in the presence of a sensible adult. In fact, the American Academy of Pediatrics recommends that children under age 16 should not ride ATVs at all.

Most ATVs sold these days are single-rider vehicles, designed for active riding. Drivers need to shift weight often, and in all directions. Passengers inhibit this ability, endangering themselves and the driver, and increasing the risk of a rollover or crash.

Because of the inherent risk of riding all-terrain vehicles, riders should always wear a helmet that is certified by the U.S. Department of Transportation (DOT) and/or the Snell Memorial Foundation.

We also recommend goggles for eye protection from flying debris, and gloves, long-sleeved shirt and pants, as well as ankle-high boots, to protect the skin from road rash or other lacerations.

Never Ride an ATV While Under the Influence

Often, recreational ATV riding takes place on weekends and during vacation time, when people tend to drink more than they normally do. However, hold off on consuming alcohol or marijuana until after your ATV adventure.

The ATV Safety Institute offers hands-on training across the U.S. This type of training can reduce ATV accidents and injuries by teaching ATV riders of all ages and experience levels the skills to handle many risky but common off-road situations.

While ATVs are somewhat inherently dangerous, they also seem to invite risky driver behavior. Most ATV accidents are caused by driver negligence, such as ignoring safety rules, driving under the influence, or allowing children to ride adult ATVs.

Other causes of ATV accidents are poor maintenance by the ATV owner, or manufacturing/design defects. In the past few years, CPSC and Consumer Affairs have both reported several ATV model recalls due to dangerous issues. These models include:

If you or your child has been injured in an ATV accident, or you have lost a loved one due to ATV driver negligence or product defect, you may be owed compensation. It is unfortunate that many states do not have stronger legislation to protect children from injury and death in ATV accidents. But TorkLaw is here to help victims, and to try to use the legal system to prevent future incidents. Contact us for a free, no-obligation consultation.