It was supposed to be a tranquil holiday dream for divers: an opportunity to explore the colorful and rarely-visited reefs of San Miguel Island. But the Labor Day weekend boat accident off the coast of California’s Northern Channel Islands ended in a fiery tragedy, with 34 presumed dead in a dive boat fire.
Passengers’ family and friends, and the Santa Barbara diving community, were left stunned. The last thing anyone expects on a dive excursion is to die a dive boat fire.

Timeline of the Dive Boat Fire 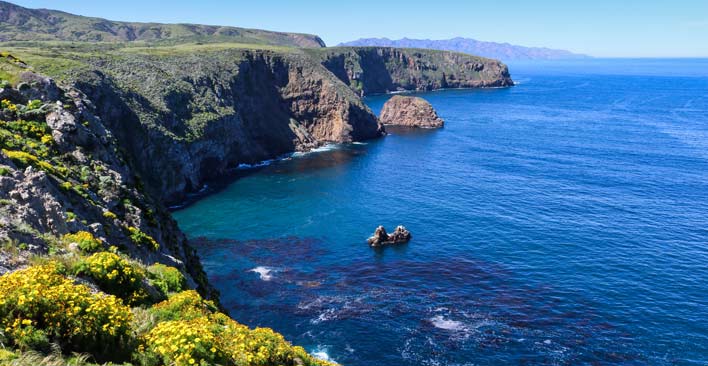 The $665 dive trip, chartered by Worldwide Diving Adventures, was aboard the 75-foot dive boat Conception. 33 passengers and six crew members had boarded in Santa Barbara Harbor on Friday evening, August 30. The boat left at 4:00am on Saturday morning, and spent Saturday and Sunday enjoying dives, nature lectures and gourmet meals in the Channel Islands.
Early Monday morning, they were anchored on the north side of Santa Cruz Island at Platts Harbor, set for one final day of diving before their scheduled return to the harbor Monday at 5:00 that afternoon.
At 3:14 a.m, the United States Coast Guard (USCG) base in San Pedro, California heard a frantic “Mayday” call on Ventura County Marine 16 radio scanner channel. Someone is heard saying, “I can’t breathe.”
During the call, the USCG confirms that the Conception is on fire. The person identifies himself as the captain of the vessel and says his name is Jerry. The captain says he has 33 passengers on board, and that 34 in total, with the addition of one crew member, are trapped below deck. The operator asks if he can get back on board and unlock the doors. He is asked about firefighting equipment.
At 3:18 a.m, the USCG broadcasts a request for any area vessels to respond, and reports that they are sending help.
By 3:28 a.m. Ventura County firefighter boats reached the Conception and reported that fire had completely engulfed the boat, and there was no point in attempting to put it out. Their main objective at that point was to look for victims.
Around 3:30 am, Bob and Shirley Hansen were asleep aboard their 60-foot fishing boat, the Grape Escape. They told The New York Times they heard pounding on their vessel and discovered five crew members who had escaped by jumping into an inflatable boat when the fire grew out of control. Bob Hansen reported seeing the Conception aflame from stem to stern, and hearing explosions.
By 8:49 a.m., the Coast Guard confirmed that the Conception had sunk 20 yards from shore. At that time, only the five crew members were safe and accounted for. The rest were considered missing.
By early Monday evening, eight deaths had been confirmed: four bodies had been recovered and another four were located on the ocean floor but not recovered.
Then, around 9:50 Monday night, the Associated Press reported that USCG had recovered a total of 20 bodies: 11 females and nine males.
As of Tuesday, September 3, the Coast Guard has suspended search efforts. As of now, 14 of the Conception’s passengers remain missing, although divers have reported between four to six bodies in the wreckage. Once the boat is stabilized, efforts will resume to recover them. 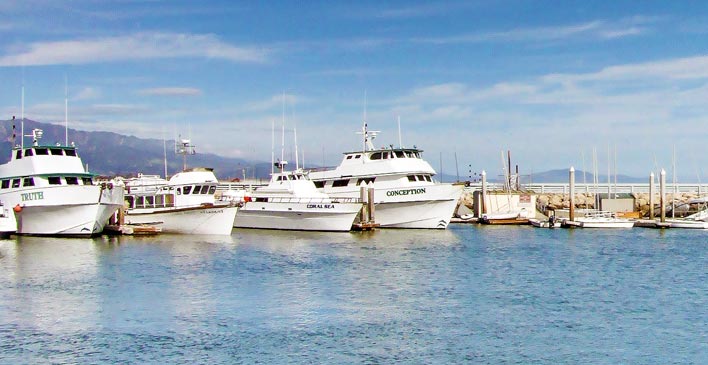 So how was it that the five crew members were able to escape the dive boat fire, but 34 others on the boat could not?
People who have been aboard the Conception explained that the dive boat, like many other liveaboard charter vessels, are built with a large sleeping capacity. Crew members, however, sleep on the top deck. This is why most of them were able to escape quickly.
Below decks, 46 passengers can sleep in 13 double bunks and 20 single bunks. The bunks are stacked, some three-high, and the quarters are tight. There is a narrow stairway leading to the galley. At the other end is an escape hatch above one of the bunks. To access the hatch, one must climb the correct bunk, like a ladder, and push the hatch door upwards.
If the stairway was blocked when the fire broke out, finding the escape hatch in a dark, smoke-filled room may have been impossible.
The wood-hulled Conception was powered by 550-horsepower diesel engine with a total fuel capacity of 1,600 gallons. Given that, it is also likely that the fire spread too quickly for the crew to be able to help victims.
Bob Hansen, the owner of the boat that rescued the crew, told reporters that two of the crew members did go back to look for survivors, but it was too late.
The Conception was operated by Truth Aquatics, Inc. and was advertised as being designed for and by divers.
According to the web site, Truth Aquatics has been in business since 1974. Founded by liveaboard diving pioneer Roy Hauser, it is now run by Glen Fritzler, who has known Roy since he began diving at the age of 12. The captain of the Conception is listed as Jerry Boylan.
There are two other boats in their fleet: Truth and Vision. Their boats are often used for diving charters around the Channel Islands.
Currently, the cause of the fire is unknown.
The last two USCG inspections of the Conception, conducted in February 2019 and August 2018, found no problems; however 2014 and 2016 inspections did find violations related to fire safety. A faulty heat detector in the galley was replaced in 2016, and a leaky fire hose was replaced in 2014. Records show that the owners responded quickly to these issues.
The National Transportation Safety Board (NTSB) is investigating the accident, assisted by Santa Barbara County sheriff and fire departments.

TorkLaw extends its deepest sympathy to the families and friends of the deceased and missing passengers of the Conception during this shocking and confusing time. Currently they are left with many unanswered questions about their tragic loss. Many will be left with economic uncertainty as well.
Once more is known about the cause of the accident, it is likely that some form of civil action will proceed on behalf of the victims’ families.
Who might be liable in this case?
In this case, Truth Aquatics, the company that owned and operated the boat, and Worldwide Diving Adventures, the company that chartered the trip, may both be held liable for the wrongful deaths of the trip’s passengers. Depending on what investigations discover regarding the fire’s cause, as well as the actions of the crew once the fire began, the captain or other members of the crew may also be held liable.
We await the outcome of the NTSB’s investigation and are ready to assist anyone who has been impacted by this horrific event.